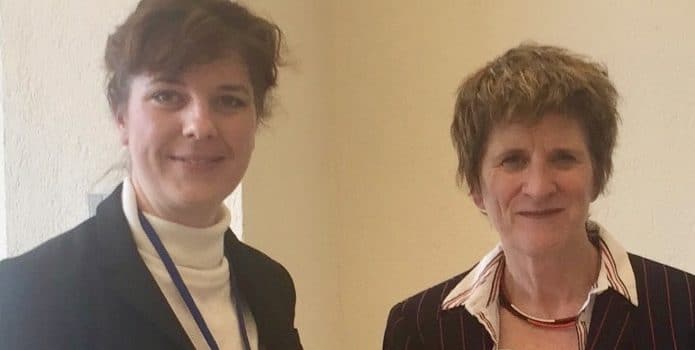 As IFSW and the OHCHR prepare plans for working together, Priska Fleischlin the IFSW UN Commissioner meet and interviewed UN representative and qualified social worker Kate Gilmore who holds the position of Deputy High Commissioner (OHCHR). They discussed the upcoming World Social Day event at the United Nations and ‘Social Workers Standing Up for Human Rights’.

Priska Fleischlin: What does standing up for human rights involve from an OHCHR’s perspective?

Kate Gilmore: First of all, we are delighted to have this opportunity to engage with the International Federation of Social Workers. Social work is a vital profession from the human rights standpoint; contributing to practical and tangible advancement of human rights in people’s daily lives.

As set out in the Universal Declaration of Human Rights, human rights, first and foremost, are a framework of universal values, principles and standards through which people the world over can notice and engage our common humanity. The great gift of the modern human rights framework – its norms, laws and standards – is its stabilizing and strengthening of our understanding of what it means both to be treated humanely AND to act towards another humanely. Standing up for human rights then involves honoring and advocating for the implications that this holds for how we should behave towards each other. Upheld, human rights enable us to be the best and fairest we can be together: individually, in community, and in mutual respect. Erosion of human rights leads inexorably in the opposite direction – to de-humanization, to cruelty and onwards, to atrocity.

Set out in 1948, the Universal Declaration of Human Rights which is further elaborated now, some seven decades later, in a range of international treaties, conventions and declarations – has its origins in the very worst that human beings can do to each – in the horrors of the Second World War, and of the hatred too that preceded it. To our enduring shame, in that era of horror, members of the so-called “helping professions” – among them doctors, nurses, psychologists, and social workers – were actively complicit in most heinous activities of the state – even as many other were courageously resisting the same.

Our duty subsequently is clear that, as members of such professions, we must draw firm and clear boundaries around what we can and can’t do in the name of our profession, whether directed to do so by the state or not. Those boundaries cannot be simply self-defined or self- imposed but must sit within the larger framework of international law and universal norms. A strong legal, normative and ethical basis to the profession is key. Human rights provide just that. Being a universal set of standards – tried and tested by states, courts and civil society the world over and applicable to everyone everywhere – human rights content is drawn from diverse cultures, traditions, belief systems and other sources of wisdom. Be thus rooted in commonality, they provide a stable and credible set of standards that can guide a humanized and humanizing social work practice.

Priska Fleischlin: How do you think social workers can effectively stand up for human rights?

Kate Gilmore: History confirms that at many of the world’s great political and social turning points – locally, nationally and internationally – social workers have played vital role. After all, social workers are in the business of revealing and supporting human beings’ fuller potential; of defending people’s fundamental dignity and thus, of defending too their fundamental human rights.

Social workers – whether aware of it or not – are playing critical human rights roles. In clinical practice settings, social workers are engaged in matters affecting, for example, people’s rights to confidentiality, to information and to informed consent. They are involved directly with their clients’ rights to physical and mental integrity. In community practice settings, social workers are engaged in shaping the rights of people to active participation in public decision making including in the context of discrimination and marginalization that impacts on exercise of such as the rights to such as people’s rights to housing, health and education. As policy advisers to local and national authorities, social work professionals play significant roles in influencing the state’s approach to matters ranging from prison reform to countering of gender-based violence to exercise of rights for people living with disabilities to protection of indigenous peoples’ rights to land, language and culture.

In other words, and at every turn, standing up for the rights, and upholding the dignity, of all human beings is integral to the social work profession. At its best, social work stands up for communities and individuals who are treated unjustly, for example in the context of rampant urban development; and speaks up for those who have no seat at decision-making tables – such as people from minority communities and children whose rights are imperilled by the state.

Social workers also stand at the intersection of a range of academic disciplines and technical knowledge. They have a unique ability to interpret such bodies of thought from the standpoint of the person – of the intimately, individualized human being. And, that standpoint is all that human rights in turn asks of us – that the person always be seen as an actor – an agent not a silent, compliant, inert object – in the projects of the state – be it in international or urban development; in humanitarian or crisis action; when in receipt of care, or institutionalized or living independently: that the person never be rendered a passive, voiceless and invisible object of policy but always be approached as a holder inalienably of rights.

Today, the world desperately needs social workers to reinforce and defend this fundamental idea that people always – by virtue of birth – are holders of rights. This precious idea is under attack and yet it deserves standing up for! As human rights defenders, social workers can pay high price for their solidarity with those whose rights are under threat; at times, even at cost to their own lives. Which is why professional associations – such as the Federation – have a critical part to play in “defending the defenders” and in protecting the ground on which stands principled, ethical and dignifying social work.

Priska Fleischlin: How could social workers and OHCHR collaborate?

Kate Gilmore: Maybe there are three things we could do better together: First, together we can work to buildup, broaden and stand with the global network of professionals who are willing to self-identify with human rights and who are willing and prepared to advocate for human rights with decisionmakers and in civil society.

Second, we can more effectively support the role of social workers in promoting the policy and practice implications of human rights based social work and of human rights-based public policy. Issues such as participation in decision-making; free, prior and informed consent; the exercise of freedom of expression; the dismantling of gender, race-based and other forms of discrimination – these can be the subject of “good practice” dialogues and exchange, helping inform the body of knowledge and professional standards that underpin the practice of social work.

Third, we can work to strengthen the accountability of social work, by developing standards for the legal, normative and ethical basis of the profession. We need to ask and answer core questions: how do we as social workers ensure and commit to transparency, gender equality, non-discrimination, informed consent and client-centered accountability in our daily practice so that we live up to the same human rights standards that we are advocating to others.

The United Nations Sustainable Development Agenda – with its goals to 2030 – is an all- governments supported agenda for delivery of very concrete advances in the realization of people’s human rights Perhaps we should perhaps organize our collaboration for human rights-based social work under the Sustainable Development Goals to help focus our efforts, open wider the doors of exchange with governments and invite other key stakeholders to advance their commitments to human rights .