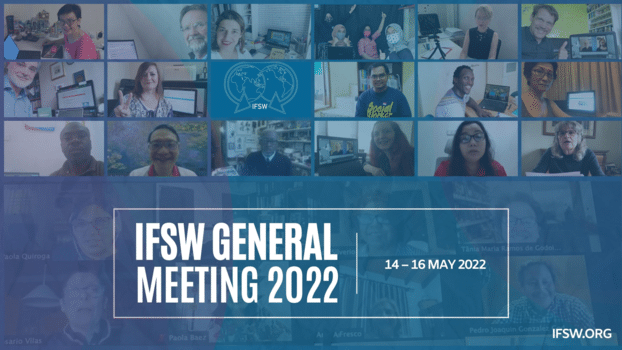 The IFSW 2022 General Meeting (GM) will be held as an online forum on our website on the 14th, 15th and 16th of May. Details will be published on this page as documents become available.

The General Meeting is the supreme governing body of the Federation and during these three days, member organisations will discuss and approve the policies of the Federation, elect the Executive Committee, and if required approve amendments or additions to the Constitution.

The IFSW Secretariat hopes that all members organisations will actively participate in the online forum. More information about registering to participate and how the online process will work will be published early in 2022.

The IFSW global executive has initiated these motions to ensure that the procedures for the 2022 online General Meeting are correct and in-line with the constitution and bylaws. The motions are proposed by Romania and seconded by Zambia. These motions are being submitted as an electronic vote to all IFSW members.

Motion 1:
This motion allows to hold the IFSW 2022 General Meeting online (14th, 15th and 16th May), and for the constitutional procedures to be carried out electronically. Including:

Motion 2:
Late submission of the proposed policy  “The Role of Social Workers in Advancing a New Eco-Social World”

Motion 5:
Late nomination for Charles Draecabo for the executive position of Africa Regional Vice President. (link) This nomination is pending the Uganda Association is in good standing before the General Meeting starts on May 14th at 07h00 UTC

The General meeting will run in three blocks of time during the above days. These blocks are called ‘sessions’.

The timing of the sessions has been organised to maximise convenience for all time zones. The timing is listed below with the agenda items as UTC time (Coordinated Universal Time).

Each IFSW member organization is entitled to have 1 Main Representative who cast their votes and 2 Delegates participate in the General Meeting. During session 1 (discussion), the 3 Representatives of each member organization will have the opportunity to discuss, make comments, raise questions and motions, but it expected they will work together as a team. With regards to coordinating bodies, the number of delegates can be extended by written request to the President and Secretary-General, but only one person in a coordinating body can cast the votes on behalf of the body.

The discussions of all agenda items are open simultaneously and will last 22 hours. There is no voting in this session. Voting will only be possible in sessions 2 and 3 to ensure all the discussion has taken place before votes are cast.

Discussion will take place on the General Meeting of the IFSW Website. Please note that the links below only work if you are logged in and if you are a confirmed Main Representative or Delegate of your organisation with relevant access rights.

Please find all the reports linked to the agenda items in the relevant containers further down on this page.

We will be adding links for each agenda item to the relevant location in the discussion platform closer to the general meeting.

8. EXECUTIVE CENSURE OF THE ISRAELI UNION OF SOCIAL WORKERS

12. NEW POLICIES
12.1 The Role of Social Workers in Advancing a New Eco-Social World

CLOSE OF ALL DISCUSSIONS

In this session, IFSW member organizations in good standing can participate.

This session will include voting on the regional representatives and all motions related to the above agenda items that do not have contingent or dependant or amendment motions. The order of the motions will be determined by the Chair and the Parliamentarian.

Only the Main Representative will cast votes will have access to the voting platform.

All votes will be submitted to the committee of tellers who will count the votes. This committee will comprise regional nominated representatives, who are not themselves allowed to vote.

The results of the votes will be placed on the General Meeting website before Session 3 begins.

Instructions on how to cast your votes will be forwarded soon.

In this session, IFSW member organizations in good standing can participate.

This session will include voting on all remaining motions.

Only the Main Representative of who casts the votes will have access to vote.

All votes will be submitted to the committee of tellers who will count the votes. This committee will comprise regional nominated representatives, who are not themselves allowed to vote.

Instructions on how to cast your votes will be forwarded soon.

The registration process for the General Meeting has started on the 1st of April 2022. Member organisations have been notified by email. Please click HERE

Each IFSW member organisation is entitled to appoint 1 Main Representative who will cast their votes and 2 Delegates in the General Meeting.

With regards to coordinating bodies, the number of delegates can be extended by written request to the President and Secretary-General, but only one person in a coordinating body can cast the votes on behalf of the body.

Only member organizations in good standing shall be entitled to full participation in the Federation elections in accordance with the Constitution and the By-Laws.

It would be appreciated if all participants can register before April 20th, 2022 to help IFSW Secretariat with the logistics.

Read the Rules of Order that will be used during the General Meeting.

Executive positions that are open for election

The positions on the IFSW Global Executive listed below are open for election and will be voted upon during the General Meeting on the 14th, 15th and 16th of May 2022. To nominate for one of these positions, nominations should be received no later than Friday 25th March 2022 and be submitted to the IFSW Elections Officer David Jones () and the IFSW Secretary-General ().

It is important that nominations comply fully with the IFSW Bylaws and, hence, they should include the following documentation:

Further documents submitted by the Nominee or Candidate can also be included providing the information is consistent with the IFSW Statement of Ethical Principles. The documentation must be sent by email. All documentation needs to be received no later than Friday 25th March 2022  Please note that the Constitution / Bylaws only allow for late nominations by a vote of the General Meeting with the support of at least 75% of voting members.

If you have any questions please contact the IFSW Elections Officer David Jones () or IFSW Secretary-General Rory Truell ().

Positions in 2022 open for election with links to the Job Description:

Open positions that are appointed by the Executive

IFSW seeks a candidate for the role of  Global Ethics Commissioner. This role creates significant global leadership opportunities to advance the profession of social work. Please note that the roles are voluntary based, there is no financial compensation and successful candidates will be a part of a dynamic international team shaping social work’s growth and impact. Each role involves approximately 3 to 4 hours per week on average. Deadline 25th March 2022

Nominations will be accepted for the positions that include:

Applications must be sent to IFSW Secretary-General Rory Truell ( the Subject line: ‘Application for Global Commissioner Position’ before the 25th March 2022. All eligible applications will be reviewed by the IFSW Executive who will make the final appointments.

This nomination will be withdrawn, if Mr. J. C. Mumba is elected global President

A member organization may act as proxy for another member organization not in attendance. An appointment of a proxy is valid if both the organisation giving and the organisation exercising the proxy are in good financial standing at the commencement of the General Meeting. The proxy must be received by IFSW Secretary-General Rory Truell () not later than the commencement of the General Meeting.

There are no new membership applications to be voted on in this General Meeting. Currently, however, there are two national associations of social work that are working with the Secretariat and Ethics Commission on developing their documentation and processes to meet the internationally required standards. Their applications for membership are expected in the coming weeks. Members will be informed.

Proposed new policies will be added when received by the Secretariat. Proposed policies should be sent to no later than 15th March 2022.

This policy has been submitted after the required deadline and requires the General Meetings agreement to be formally added to the agenda.

Links to each of the reports received by the Secretariat are attached bellow. Reports to be sent to

Report on the People’s Global Summit

Links to each of these reports as received by the secretariate. Global Commissioners should send their consolidated reports to

Motions to amend the IFSW Constitution

For proposals to amend the IFSW By-Laws, please refer to ‘other motions’ below.

Proposed other motions (not affecting the IFSW constitution) will be published here. Proposals must be sent to the Secretary-General () no later than 14th April 2022.

Award in Memory of Andrew Mouravieff-Apostol

The International Federation of Social Workers is pleased to have receive two nominations for the Award in Memory of Andrew Mouravieff-Apostol, the IFSWs highest level of recognition.

The executive has approved the two nominee to receive the award for 2022 and this are;