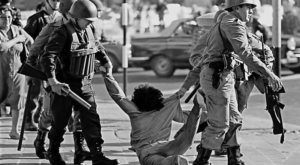 Brute force: a protester against the regime is arrested in Buenos Aires. Photograph: Daniel Garcia/Getty

IFSW’s Human Rights Commission notes that it is now more than 40 years on from the military coup in Argentina that led to gross human rights abuses in that country. Also termed ‘The Dirty War’, and lasting from 1976 to 1983, this was a seven-year campaign by the Argentine government against suspected dissidents and subversives. Jorge Videla, Orlando Agosti and Emilio Massera formed the military junta that ousted the Argentinian president, Isabel Eva Perón, widow of Juan Domingo Perón, in 1976. They began a campaign to crush any dissent from their autocratic rule.

The targets were social workers, social work students, militants, trade unionists, writers, journalists, artists and anyone suspected to be a left-wing activist. The “disappeared” (victims kidnapped, tortured and murdered whose bodies were disappeared by the military government) included those thought to be politically or ideologically a threat to the military junta, even vaguely; and they were killed in an attempt by the junta to silence the social and political opposition.

Many people, both opponents of the government as well as innocent people, were “disappeared” in the middle of the night. They were taken to secret government detention centres where they were tortured and eventually killed. These people are known as “los desaparecidos” or “the disappeared.”

The juntas organized and carried out strong repression of political dissidents (or perceived as such) through the government’s military and security forces, preparing for the implementation of neoliberal policies. They were responsible for the illegal arrests, tortures, killings and/or forced disappearances of an estimated 30,000 people. Assassination occurred domestically in Argentina via mass shootings and the throwing of live citizens from airplanes to death in the South Atlantic. Additionally, 12,000 prisoners, many of whom had not been convicted through legal processes, were detained in a network of 340 secret concentration camps located throughout Argentina.

The disappearances have left a deep scar in Argentine society for decades – in particular on those who had a relative taken away by the security forces at the time. The pattern was similar for those arrested. Many were taken from their homes in the middle of the night, tortured at clandestine detention centres and then disposed of.

Pregnant women arrested during this period were kept in prison until their babies were born and the mothers were then killed, their babies being illegally “adopted” by military families. The Grandmothers of the Plaza de Mayo (Asociación Civil Abuelas de Plaza de Mayo) is a human rights organization with the goal of finding these children. It was founded in 1977 to locate children kidnapped during the repression, some of them born to mothers in prison who were later “disappeared“, and to return the children to their surviving biological families. The work of the Grandmothers has led to the location of more than 10 percent of the estimated 500 children kidnapped or born in detention during the military era and illegally adopted.

The IFSW Human Rights Commission salutes the work of these grandmothers to bring these forcibly adopted children back into contact with their families. We also wish to express our solidarity with the people of Argentina, and the social worker associations in the Latin America and Caribbean region who continue to be concerned for the consequences to families of this catastrophic assault on human rights.