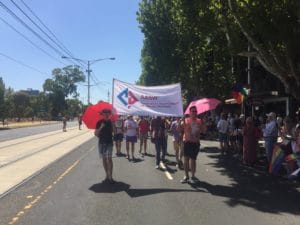 As the Victorian Branch of the Australian Association of Social Workers took to the streets on Sunday to support LGBTIQ Victorians at the Midsumma Pride March, the Association welcomed the Victorian Government’s announcement that it plans to outlaw ‘conversion therapy’.

The harmful and thoroughly debunked practice aims to change, suppress or eliminate an individual’s sexual orientation or gender identity. While the practice is not outlawed, it sends a message that LGBTIQ individuals are not ‘normal’ and need to be fixed.

AASW National President Christine Craik said, “These messages do so much damage and need to be stopped. We stand with LGBTIQ Australians and support the Victorian Government’s stance on banning conversion therapy. This planned ban follows an extensive investigation into conversion practices by the Health Complaints Commissioner (HCC), who found those subjected to this so-called ‘therapy’ experienced long-term psychological harm and distress. This is something that social workers and other mental health professionals have known for many years.

“The Victorian Government’s announcement sends a clear and positive message to young people who may be dealing with the stress and anxiety of knowing they are same-sex attracted and the social pressures that are associated with it in an unaccepting environment.

“The Australian Government must also make clear that discrimination against employees or students on the basis of sexual orientation or gender identity will not be tolerated.

“We all have a role in taking a stand against homophobia, including internalised homophobia, which is when LGBTIQ individuals can sometimes believe the homophobic messages and attitudes around them. It causes needless harm and division in communities and can lead to poorer health and wellbeing outcomes in LGBTIQ individuals, which we have seen is sometimes fatal.

“This is why the Victorian Government’s announcement is so important – it is a welcome step in continuing to affirm the health and wellbeing of LGBTIQ Australians.”