The Commonwealthi Organisation for Social Workii celebrated the conclusion of an active two years with its first ever virtual Board Meeting and exceptional General Meeting. 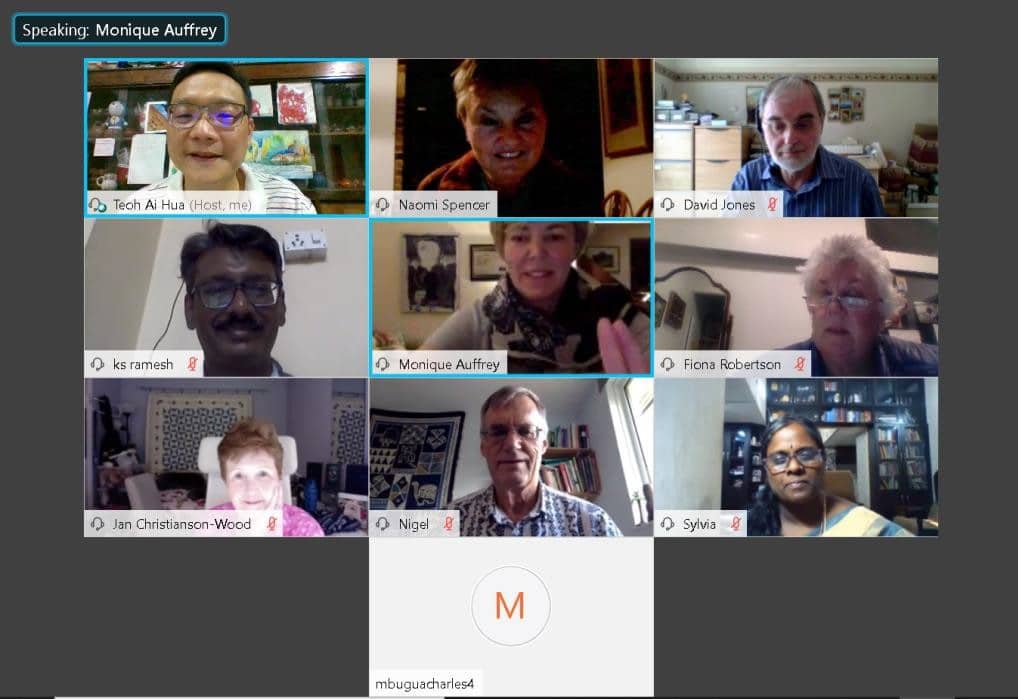 COSW Board members in global discussion on Saturday 5 September 2020

NEW CHAIR ELECTED FROM INDIA
Sylvia Daisy Romanus (India) was elected as COSW Chair.  Dr Sylvia is Associate Professor  of Social Work at Madras Christian College and has been a COSW Board member since 2012. She was instrumental in organising and delivering the first ever COSW digital webinars in July 2020.  Her teaching and research interests include women entrepreneurship and empowerment. Welcoming her election, Sylvia said: ‘Coming together is beginning: keeping together is progress: working together is a success. The health, social and economic pandemic of Covid-19 has demonstrated the importance of social work. I will make sure  that the Commonwealth hears about social realities from the heart of social workers.’

The Board expressed grateful thanks to Teoh Ai Hua who had served as COSW Chair since 2014.  He is a former Chair of the Malaysian Association of Social Workers and is currently the Honorary Secretary of the IFSW Asia Pacific Region and represents the Asia Pacific Region in the IFSW Ethics Commission. He is Senior Lecturer in Social Work at the School of Applied Psychology, Social Work and Policy, Universiti Utara Malaysia with special interests  in professionalisation of social work, case management and community care, and adult services.  Teoh continues to serve as a COSW Board member.

REPORT ON COSW ACTIVITY
The Board noted a significant increase in activity during the past 24 months, including:

BOARD MEMBERSHIP
The following Board members were elected:

Fiona Robertson (Honorary Treasurer, New Zealand) and Nigel Hall (UK) had indicated a wish to stand down as Board members. Both were thanked for their significant contribution to COSW.

Vacant places on the Board can be filled by co-option during the coming year.  It was noted that it would be good to include a member from the Caribbean.

FINANCIAL REPORT
COSW exists primarily thanks to the voluntary commitment of the Board members and other colleagues with minimal expenses. The accounts for 2019-2020 were approved by the Board showing a balance of around £1,000. The British Association was thanked for providing support in terms of modest expenses and staff support.

GOVERNANCE ARRANGEMENTS
The Board agreed to set up a review of governance by a small group of Board members chaired by Jan Christianson-Wood (Canada).

GENERAL MEETING ARRANGEMENTS
The Board noted the impact of the Covid-19 pandemic and the fact that the planned world conference in Calgary had been cancelled.  It had been planned to hold the COSW General Meeting at that conference.  In these changed circumstances, the Board resolved to hold an exceptional General Meeting on 5 September 2020 to approve accounts, elect Board members and note the report on activity.

Download the press release as a PDF here.
For further information email

i The Commonwealth is a voluntary association of 54 independent and equal countries. It is home to 2.4 billion people, and includes both advanced economies and developing countries. 32 members are small states, including many island nations. Member governments have agreed to shared goals like development, democracy and peace. Commonwealth values and principles are expressed in the Commonwealth Charter. The Commonwealth’s roots go back to the British Empire. But today any country can join the modern Commonwealth. The last country to join the Commonwealth was Rwanda in 2009.

ii COSW is an Accredited Commonwealth Organisation with a history going back to the first meeting in 1994 in Colombo, Sri Lanka. COSW is a company limited by guarantee and registered in the UK. Its Board is drawn from all regions of the Commonwealth. COSW is affiliated to the International Federation of Social Workers and upholds the IFSW/IASSW global ethical principles.

iii IFCO is a loose forum of Commonwealth Accredited Organisations with diverse interests and background who are working together to promote the voice of civil society within the Commonwealth family. It holds quarterly meetings, co-ordinates submissions to the Commonwealth Heads of Government Meetings and develops common positions on the issues of the moment within the Commonwealth. COSW has been an active member from the outset and serves on the IFCO Steering Group.