Around 75 young carers from across East Africa gathered in Nairobi on Friday 7 December for the first young carers’ regional forum aimed at giving a voice and support to this often neglected and isolated group.

The event was sponsored bythe Commonwealth Organisation for Social Work (COSW), organised by the Kenya National Association of Social Workers (KNASW) with a lead role taken by its young social workers group, delivered in partnership with the Children’s Society (England) and funded by the Noel and Thea Jones Fund (UK) with COSW.  The event included a regional meeting of IFSW members in East Africa.

The young people – all of whom have family responsibilities, often because of the death or illness of one or both parents – took part in activities and workshops to boost their confidence, help them engage with each other and with opinion leaders and crucially, to have a break from their caring duties with many leisure activities, group activities, sports and swimming.  Fun was had by all.

The event, supported by several Kenyan and UK organisations, had been planned and organised by Kenyan young people, who had given it the theme ‘determined to achieve and shine’. 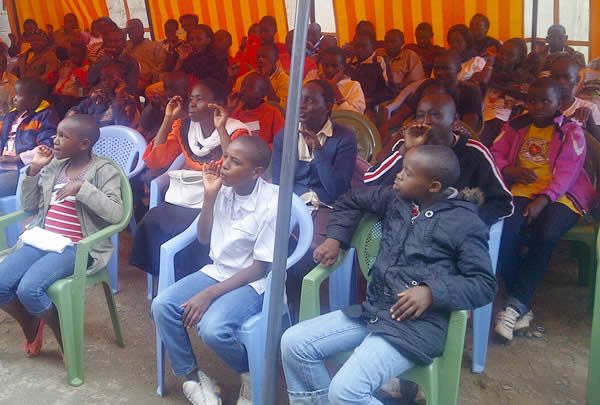 Speaking before the event, Ernest Mwangi, the young carer coordinating much of the planning, said:

‘Thousands of young carers in East Africa are super heroes, keeping families together, often at great cost to their own education, health and future.  The demands and responsibilities of caring are overwhelming.  The pressures of isolation, stigmatisation, not being understood and not having anyone to hear makes me feel as if I am exploding inside.

‘I hope this forum will provide an opportunity for us to speak out, to have our voices heard and even to be appreciated for the great work that falls on our shoulders.’

‘I’m delighted that we are supporting the Forum by using our learning and experience from the UK.  Many young carers fail to get the support and help they so urgently need; too often this damages their childhoods.

‘We hope that by sharing with other organisations and professionals in Africa, we can help improve good practice and support young carers and their families to flourish.’

‘This is another crucial step to helping young carers get the recognition they need.  I thank social workers across Africa who daily provide support to young carers and who have helped make this forum possible.  There will be a parallel regional meeting of East African social workers, aiming to strengthen the social work profession, working with the African Region of the International Federation of Social Workers.’

The event aimed to:

The four IFSW member associations represented at the meeting – Kenya, Rwanda, Tanzania and Uganda held a sub-regional meeting during the event.  This shared news about national developments, discussed sub-regional cooperation, debated a report on implementation of The Global Agenda for Social Work and Social Development and received information about the African regional conference to be held in South Africa in September 2013.

‘This project started in 2003 when Max Anyuru from Uganda spent around 3 months on a Commonwealth Professional Fellowship working in the United Kingdom.  His observations inspired COSW to adopt young carers as a project theme.  In 2006 the UK government funded the first young carers’ conference in Nairobi involving social workers, young carers and others.  That conference was jointly facilitated by the Children’s Society and supported by the Commonwealth Youth Programme.  COSW and the Children’s Society have continued to work in partnership with young carers, local social work associations and others to develop the project.  Several young people from Kenya have been funded on visits to the UK to develop experience and skills.  This culminated in this first regional forum and festival for young carers.  All the partners agreed in 2012 that the event had been a success and that our shared objective is to mount a bigger and even more effective event in 2014.’

‘This project is an excellent example of the sort of partnership working which is at the heart of The Global Agenda for Social Work and Social Development.  The Agenda commits us to supporting, influencing and enabling structures and systems that positively address the root causes of oppression and inequality. We commit ourselves wholeheartedly and urgently to work together, with people who use services and with others who share our objectives and aspirations, to create a more socially-just and fair world that we will be proud to leave to future generations.

‘I was pleased to be able to inform Helen Clarke (head of the United Nations Development Programme) about the event when I met her in New York in December 2012.  She fully supported this approach and encouraged IFSW to become engaged in similar activities in other regions.  IFSW looks forward to continuing joint work with COSW along these lines.’

‘This event was the culmination of almost 10 years work by COSW in a creative partnership with a range of African and UK based organisations including local community based organisations in Kenya.  Through this project and similar initiatives, COSW is fully supporting the Commonwealth Foundation’s commitment to participative democracy.  We acknowledge the key role of the Commonwealth Youth Programme in supporting the 2006 conference and helping to launch the project.  We hope that the Commonwealth will become more involved as the project unfolds.’

The HIV pandemic in Sub-Saharan Africa has done extensive damage to traditional family structures.  For this and other reasopns, children deprived of parents and older siblings then have to take over the caring tasks.

These young carers, often only children themselves, face many challenges.  They typically find themselves excluded from participation in family, social and political life and voiceless in family and community dialogue.

Caring for sick parents and younger siblings may mean they are unable to attend school themselves, sacrificing their own futures.

They risk losing family possessions and land to family members who usurp ownership.  They often face physical and psychological health problems themselves, a lack of emotional support, lack of opportunity for employment and a higher risk of falling into illegal income generation such as crime and prostitution.

The following organisational partners have an interest in and/or are supporting this event:

COSW is an organisation for social workers and others wishing to support the development of social work in the international and national activities of Commonwealth countries.

KNASW is the professional membership organisation for social workers in Kenya.

The Children’s Society (England) is a children’s charity which is committed to helping vulnerable and disadvantaged young people, including providing relief for young carers.  It organises an annual young carers’ festival and has extensive international links with young carer groups around the world.

Pioneer is a local NGO working to support aids education and community development in a rural area outside Nairobi, Kenya

The Noel and Thea Jones Fund has been providing modest support for work with young carers in Africa since the death of Noel Jones in 2007.

Ernest Mwangi, is a Kenyan young carer who has been working towards this day for 6 years. He is the young person who is coordinating much of the planning for this forum.  He attended the first young carer conference in Nairobi in 2006 and has been funded to visit the UK to extend his knowledge of young carers’ activities and develop his organising abilities.

For an academic discussion of the ethics and practicalities of involving children and young people in consultation and action about their rights, see:

The ethics of children’s participation: Fundamental to children’s rights realization in Africa