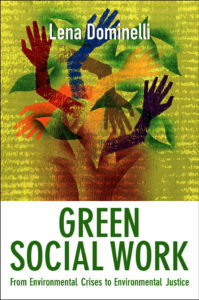 This book is a timely and inspiring publication. It shows that the social and the ecological question are no separable discourses and it tries to re-define the role of social work within an integrated socio-ecological debate. Along the leading theme of social and environmental justice, Lena Dominelli defines humans as being shaped and influenced by their bio-psycho-social condition. And she provides analyses and reflections for a better understanding of the current economic and ecological crises and opens perspectives on how to overcome them. To reach this, the book is searching for new perspectives and models for thinking, being and living together in local and global societies that are socially and ecologically just.

Dominelli starts with an analysis of the current state of social work, a “profession in turmoil”, that is losing its recognition and credibility and its fiscal and conceptual support. The dominance of the neoliberal model, its focus on politics of austerity and the activating welfare state makes it more and more difficult to develop and sustain welfare systems as guarantors for social justice and well-being. This has far reaching effects: The dominant model of economic growth and free markets results in an increase of poverty and marginalisation and, at the same time, the shrinking welfare state can less and less care for the poor in society.

Effects of the currently leading models of modernisation can also be viewed in the dominant form of urbanisation. Dominelli points out that growing Mega-Cities with high population density, social divisions and increasing discrepancies in income and participation provide a model of development that needs to be generally reflected. She argues for alternative forms of urbanisation based on funding structures of micro-finances, social enterprises, communities of sharing and subsistence that are leading to smaller units of habitat and more egalitarian and democratic local communities.

The socio-ecological consequences of the present economic model can also be faced in the developments of industrialisation. Here, Dominelli shows the dramatic consequences of pollution resulting from current forms of production and the social and ecological impacts of industrial accidents in recent history. She also describes and illustrates the potentials of social workers in disaster relief. And she clarifies the terms of resilience and vulnerability that should be regarded as processes and be negotiated and designed along the needs and interests of the involved people.

The Western model of consumption, urbanisation and industrialisation is leading to the results of climate change and global warming. Dominelli analyses the emerging conflicts on rights and duties of energy consumption and the struggle for recognition and negotiation of global climate aims. She highlights that environmental justice needs to be thought from the perspectives of countries that are directly affected by climate change leading to local and global solutions for climate schemes.

A bigger focus is then laid on the social consequences of environmental crises and their impact on poverty and mass migration. The author illustrates that migration is often driven by social, economic and ecological crises which for too long have been accepted as by-products from modern production and consumption. As a result, famine, poverty and environmental degradation urge a continuous number of people to involuntarily migrate to search for better alternatives at other places. Dominelli’s analyses point out on the tremendous existential impacts for all the affected persons.

This also leads to the need for conceptual challenges. Dominelli points out that it no longer seems adequate to separate between natural and man-made disasters. Human impacts on nature and geography have become influential and it is necessary to regard this interconnected situation. Therefore it becomes necessary to reflect models of social and ecological development and to develop more complex multi-level approaches for sustainable development along socio-ecological models.

Socio-ecological development is often contextualised by settings of conflicts on natural resources and limited geographic space. Competition about access to water, food, soil, fuels and space for housing and for traffic leads to tensions within and between nations and regions. If these conflicts are not mediated and ruled along democratic and just regulations they will increase. Here social work can play an important part of intervention and become an actor of mediation.

This leads to the final and possibly biggest task. To meet the challenges it is necessary to develop new models of society along the principles of justice and sustainability as well as to re-define the human relationship to the social and ecological environment. This could also be reached through a rediscovery and recognition of indigenous worldviews and a reflection of ongoing post-colonial settings. Along examples of Canada’s First Nation People, the Maori or the Mapuche, Dominelli points out how alternative models of thinking could be rediscovered and integrated into concepts for sustainable development.

In a concluding chapter, she then elaborates her model of Green Social Work. For this she enhances her already acknowledged model of Anti-oppressive Social Work Theory and Practice (Dominelli 2002) along socio-ecological considerations. Along her model structures and rules of societies need to be reflected, democratically negotiated and contested to reach and develop “alternative forms of production, distribution and consumption”. To reach this aim she develops a multi-level approach that integrates aspects of agency, reflexivity, power and resources and follows the aims of emancipating and empowering human beings to reach a good life in justice and sustainability. In the context of her model social work is regarded as an important actor for building capacities in communities as well as in working with families, groups and individuals to reach for social and environmental justice. Insofar the book provides a model for an enhanced social work practice that tries to meet current socio-ecological tasks and challenges.

Clearly the book positions the theme of environmental justice into the centre of the social work debate and shows the inseparable interconnection of social and ecological aspects of human development. Highlighting and analysing the current developments of societies and mind-sets very profoundly, it describes how global economic crises, the still powerful economic model of neoliberalism, the risks of climate change and the presence of ecological limits are inseparable processes. Therefore, also social work theory and practice are confronted with this highly complex subject matter that can only be understood in its interdependence.

Beyond these theoretical aspects the book can also be regarded as a clear waking call to revive a social work profession that has lost direction and vision within impacts of austerity, formalisation and standardisation. The powerful concept of social and environmental justice could help regaining a new focus to re-vitalise values, aims and concepts of social work. This can clearly inspire professional debates and could guide social workers in their daily tasks and missions. And it might help to think beyond individualising person-in-environment models from ecological thinking and systemic counselling that are often missing the factors of social and environmental justice.

Ecological and social problems are, more than ever, global problems that cannot be understood and solved on local or national levels alone. Rather they need to be addressed with multi-level approaches. Dominelli makes it very clear that the social work profession can and should play its role in designing and shaping this perspective.

The book provides a very broad and global overview on the current challenges. This is a timely task and has rarely been formulated in social work discourses and debates. Clearly the suggested and enlarged intervention and process model of Anti-oppressive Social Work Theory and Practice provides a good basis for reflection and intervention in the field. But while reading, I sometimes thought about the integration of other conceptual models that could be helpful to gain a broader systematic understanding of the very complex matter. Here I was met by concepts and models stemming from the debates about post-growth or de-growth societies (e. g. Tim Jackson, Niko Paech, Alberto Acosta, Serge Latouche), the concepts of Alternative Hedonism (Kate Soper) as well as debates on the Capabilities Approach (e. g. Martha Nussbaum, Amartya Sen). It could be quite inspiring to integrate such further conceptual references into the development of theories and practices reaching for a socially and ecologically just social work and for sustainable concepts of social welfare. This could help to broaden the debate and also to connect to other likeminded authors and discourses in the neighbouring social sciences. Dominelli’s “Green Social Work” clearly could be one leading voices in this debate.

Christian Spatscheck, is a Professor for Theories and Methods of Social Work at the Faculty of Social Sciences, Hochschule Bremen, City University of Applied Sciences. He is also a Visiting Scholar at Lund University and Visiting Professor at Pisa University.