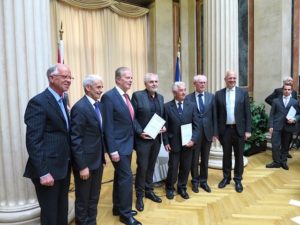 In a special ceremony of the Austrian Parliament (May 22, 2015), Herbert Paulischin received the special tribute for achievements in social work in his more than 35 years professional career.

In the eulogy was particularly stressed that Herbert Paulischin 30 years ago founded the first child protection centre in Austria. This Institution combined social work and psychotherapeutic assistance and focused on support of all concerned without threat of punishment. His ideas and the innovative concept of social work in child protection had a lasting effect and sustainable influence on the development of the Austrian structure of child welfare. Also his involvement in international social work was appreciated.

Herbert is so far the only social worker in Austria to receive this award. The award was presented by the Austrian Deputy Prime Minister, Reinhold Mitterlehner assisted by the last year recipient, Mikuláš Dzurinda, former Premier of Slovakia and Herman van Rompuy, first president of European Council.

The Leopold-Kunschak-Prize has been awarded annually since 1965 for outstanding work in the field of human sciences, social sciences and social economics. The award is named after the Austrian politician of the Christian Social Party and activist in the working-class movement, Leopold Kunschak (1871-1953). The prize has different categories: the main prize (politics), the award for academic performance, special recognition for social issues in media and special tribute for achievements in social field and society.

Herbert is the Executive Director of OBDS (Austrian Association of Social Work), the President of CFCECAS (Centre for Training and Evaluation in Social Work) and the International Representative of ASproAS (Association Pro Social Work from Romania). Herbert Paulischin was the IFSW European President from 1998 to 2002 and president of the Austrian Association of Social Work from 1996 to 2007. Since 2002 he worked most of the time in international social work (Bulgaria, Croatia, Romania). From June 2015 to May 2017 he will be team leader in an international project in Azerbaijan.

IFSW President Ruth Stark congratulated Herbert, “This is a wonderful recognition of your achievements and also a recognition of the power of social work”, she said.