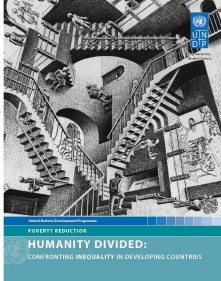 ‘In spite of the impressive progress humanity has made on many fronts over the decades, it still remains deeply divided’, according to a new report from the UN Development Programme.

The report revisits the theoretical concepts of inequalities including their measurements, analyzes their global trends, presents the perception of inequalities of policy makers in 15 countries and identifies various policy options for combating this major development challenge of our time.

The UN says the report is intended to help development actors, citizens, and policy makers contribute to global dialogues and initiate conversations in their own countries about the drivers and extent of inequalities, their impact, and the ways in which they can be curbed.

In her remarks at the launch of the report, Helen Clark, head of the UNDP, said: ‘The potential for instability and setbacks if inequalities are not reduced is increasingly recognized by world leaders, and is also preoccupying many of those who are well off, including in global business circles. Ahead of last week’s meetings in Davos, the World Economic Forum issued a report identifying widening income disparities as the second greatest worldwide risk, and warning that inequality is ‘threatening security on a global scale.’

She concluded: ‘let me emphasize that while my remarks have focused on reasons to be concerned about inequality because of its impact on human development progress, inequalities also matter intrinsically because they run contrary to what people consider fair for themselves and others.

‘The first few lines of the UN Charter emphasize the determination of the United Nations to “reaffirm the dignity and worth of the human person and the equal rights of men and women and of nations large and small”, Helen Clark observed.

Welcoming the report, IFSW Secretary General Rory Truell commented that it is one of several reports which ‘set the context for the forthcoming first report of The Global Observatory for Social Work and Social Development which will be published in July 2014 at the world conference in Melbourne, Australia’. ‘This first report will build on our earlier work with IASSW and ICSW on The Global Agenda for Social Work and Social Development.  The report will illustrate how social work can play a crucial role in promoting equalities’, Dr Truell continued.

‘As is clearly illustrated in this substantial analytical study, the research evidence demonstrates how highly unequal societies are socially and individually damaging.  This is confirmed in the practice experience known to social workers.  IFSW is determined that these social work insights will be brought to world attention and that we will support those working for a more socially just world’, Rory Truell concluded.

Key findings in the report

Speech given by Helen Clark at the launch of the report can be read here.