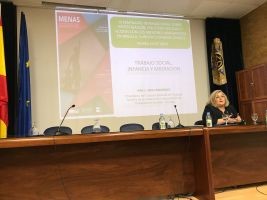 The aim of the conference, organized by the UNED (Spanish Open University), was to deepen on migrant minors at the local, national, and global level. Well known international experts participated, and visits to centers specialized on unaccompanied foreign minors (MENAS) were organized.

From 25th to the 27th of April, the city of Melilla hosted the celebration of the III International Seminar on Research, Social Policies and Action with Minors Migrants in Melilla, Europe and the United States, organized by UNED.

IFSW Europe president, Ana I. Lima, was invited to share her knowledge of the reality in Spain and in Europe. Thus, Ana Lima gave a conference in which she detailed and analyzed the role of social workers in the attention to migrant minors from a European perspective, within the global cross borders framework.

Lima also harnessed her intervention in the III International Seminar on Research, Social Policies and Action with Minors Migrants in Melilla, Europe and the United States, to make visible the manifesto that the FITS Europe approved in 2017 in this regard.

In addition to the lectures and debates, the seminar also included visits to the Unaccompanied Foreign Minors attention centers (MENAS).

As a result of the sum of the three editions held until the moment of the International Seminar on Unaccompanied Foreign Minors are being analyzed in depth at the European Center for Research, Policies and Action for Migrant Children. The center has become an international point of reference in this problem.

The attention to unaccompanied migrant minors has been in the spotlight of organizations and professionals for years. Of increasing media relevance since 2015, it is a complex reality due to its cross-border nature, which requires an international approach.