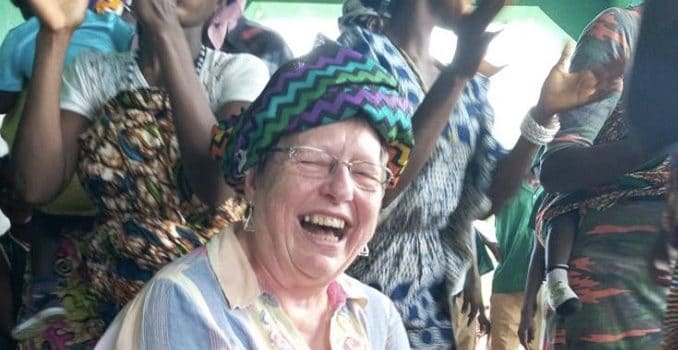 The IFSW President from 2014 to 2018 Ruth Stark was crowned chief of the Matheng section of the Lokomasama chiefdom, Portloko district, Northwest Sierra Leone on the 18th of October. With the title, Ruth Stark was also given a new name: Ya – Bomposseh Kunk Bana the third.

George Mansaray, President of the Social Workers Association of Sierra Leone said: “Ruth Stark now Chief Ya- Bomposseh Kunk Bana the third, is known across communities in Sierra Leone for her selflessness in promoting global social work, bringing to light the power of communities using indigenous knowledge to transform their lives and her exemplary modelling of social work”.

The title gives her the authority to lead her people in her section and any other community in Sierra Leone. She is able to settle disputes, promote peace, and act as a custodian for justice. Mr Mansaray added that, “She is a supreme advocate for a holistic, sustainable development from bottom up. She is the wisdom tree and the learner”.

The honour was bestowed because of Ya – Bomposseh Kunk Bana the third (Ruth Stark’s) “down to earth style as a social worker and wonderful human qualities, her readiness and willingness to listen to people of all categories and her inspiration to people to uphold indigenous knowledge which has moved them forward”.

In 2013 Ruth Stark also was awarded an MBE by Queen Elizabeth for services to social work.

IFSW Secretary-General Rory Truell commented, “That during her term as President, Ruth made a major impression on people across the world. She built relationships with people through social media, through email correspondence and on her visits to other countries – relationships that fueled connection and joint action. A comment that is often made about Ruth is that she is a genuine and real person and as a ‘practitioner-leader’, she has inspired other practitioners to stand up and be proud of who they are.”

Ya – Bomposseh Kunk Bana the third, Ruth Stark, is continuing to visit remote villages in Sierra Leone before she attends the IFSW African Regional Conference in Uganda. Her trip to Sierra Leone and Uganda has been sponsored by the British Association of Social Workers.