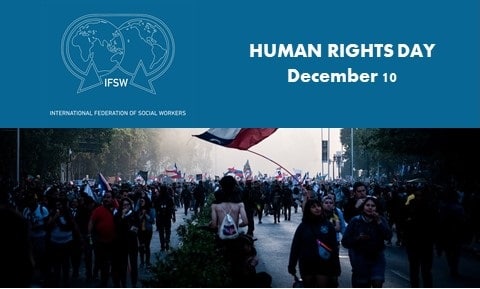 In 1988, the IFSW set up the Human Rights Commission to support and advocate on behalf of social workers who are at risk and persecuted as they practice their profession. The Human Rights Commission also advocates for the economic, social, political, cultural and civic rights and freedoms of those who seek our services – the rights that belong to all of us. Representatives from five regions guide the work.

Principles of human rights and social justice are fundamental to social work and social workers. Social and economic inequality, the ongoing war in the Middle East, the occupation in Palestine, the climate crisis, environmental destruction, food insecurity, and water scarcity deprive many lives of dignity and health. Currently, world-wide, the political and economic context is based on and supports exploitation and inequality and violates the basic human rights of people. There is an urgency to our work.

The theme for 2019 is the Year of Indigenous Languages. Indigenous languages connect people to their culture and tragically are disappearing around the world and need to be protected and preserved. Indigenous languages are not just simply a way of communication, but also, they are the way people resist against the oppressive reality of imperialist colonization. The death of an Indigenous Language is often the irreversible loss of cultural history, collective memory and unique identity.

We recognize the efforts that social workers around the world make to contribute to the promotion of human rights and to challenge injustice and oppression. We stand in solidarity with all those who work to advance human rights and struggle for a world of security, peace and social, economic and political justice.