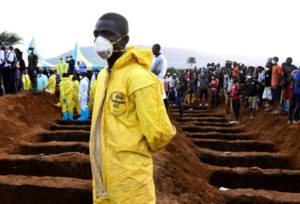 IFSW President Ruth Stark said: ‘Our global family has been hit by the devastating news from the recent landslide disaster in Sierra Leone. In the midst of responding to the immediate needs of people in Freetown our colleagues in the Association in Sierra Leone have lost six of their members and colleagues members in the mud slides. The thoughts and condolences of the IFSW community are shared with the family and friends of our lost colleagues.

The President of the Association, George Mansaray, has written to say that he and his colleagues’…

have been very busy with coordinating relief and rendering support from our perspective as social workers. The delays in responding is due to several challenges out here …one of such challenge is relief supplies going into the wrong hands and supplied to the wrong people.

We are correcting that by sticking in day in day out. The supplies are meager and if not managed well ..will cause chaos. We are a young association and looking forward to your support to further demonstrate our skills as we work with our traumatized compatriots.

George has sent us in some depth about the reality of their work:

Sierra Leone was struck by a national tragedy resulting from torrential rainfall, landslides and flash floods that spanned from the mid night hours of the 13th through to the morning hours of 14th August 2017. This disaster has gripped the nation in bewilderment as every family, ethnic group and region is affected either directly or indirectly.

Over three hundred bodies recovered under bridges, coastal areas and homes were laid to rest as the first batch of recovered bodies on the 17th of August during a state funeral. The Liberian president Ellen Jonson Sirleaf was in attendance to share the grief of her neighbours. The burials are yet ongoing as decomposed bodies are being gradually retrieved on a daily basis. It is unclear as to the number of people buried in the mud, the authorities are still to make a statement. However, neighbouring residents of the area are estimating the figures at over a thousand bodies and homes buried under the mud.

This tragedy is specific to the capital city Freetown where thousands of residents have been affected. Freetown is a mountainous city overlooking the Atlantic Ocean. Its vegetation is almost extinct with no appropriate disaster prevention and response mechanism. There are reports of smaller rural settlements being washed away by flood waters in the north of the country, this is yet to be confirmed.

As news of the disaster spread like wild fire in the harmattan, young men and women stepped up to rescue their fellow compatriots. The rescue exercise was laudable. Tears drip down on every face as they render selfless service in saving lives.

The president commended all its partners and fellow citizens for their show of bravado in this moment of national grief. He appealed to its local and international partners to keep up their good work and continue to render their support at the emergency phase and for the long haul ahead.

Furthermore, there are reported cracks on the overlying hills near the disaster area where thousands of people are resident. However, before governments order to evacuate them, they have voluntarily done so. Most of them are sheltering in public school buildings whilst others are provided with shelter by fellow compatriots and social service institutions. The school buildings are overcrowded and not conducive for lactating and pregnant women as well as unaccompanied children. There is need for more safe and conducive shelters to hold thousands of other victims coming in from all over the city.

All of the victims have their own stories to tell …..full of sadness….here are some of them:

A ten year old female child: My dad sent me to spend the summer holiday with my aunt only to be told that my family of twelve had been washed away by flood waters.

An adult lady: I travelled from south Sierra Leone to grace the wedding ceremony of my only sister on the 14th of august ….only to see her battered remains and the armless body of her husband.

A gentleman :  I travelled to the country side on official assignment only to be informed about my home and family buried under mud killing all sixteen family members.

The role of social workers remains an exemplary. Their activities include working closely with state functionaries ensuring for the setting up of a coordinating team to ensure for inter-agency collaboration, including community members in the activities of retrieving bodies from subsiding flood waters and dispatch to the central mortuary, documenting deaths and those missing, setting up registration booths for survivors, registering survivors, dispatch social workers to interim care centres for professional action, food and essential toiletries supply, blankets supply, medical care, identifying and referring traumatic cases to the trauma unit of the government’s central hospital for expert attention, soliciting funds from local enterprises to purchase essential items for especially pregnant and lactating mothers. Assembling children and looking for temporary placement with families in safer areas as well as doing daily follow up visits to ascertain their progress.

Communities have been helpful as they open their doors to provide temporary shelter and counsel to victims. As the situation seems a bit chaotic, social workers are up and running on a shift period on a daily basis ensuring for care and attention to victims. Communities are volunteering on a daily basis as they continue to stand tall to overcome the tarumatic incidence. Construction companies brought in their machines to help out, the military, fire service and police also played a key role in the recovery.

The challenges are enormous:

Other organisations are working directly on the ground with the victims rendering direct support which they welcome. Cash donations of hundreds of thousands of dollars to the government were displayed on television as well as relief supplies. Neighbouring country leaders had all visited to sympathise.

It is worth noting that people look at the cause of the mud slide and flooding in different perspectives. From the religious point of view, some say God is angry with the people and there is even more danger looming over the nation, others believe it is the work of the spirits dwelling in those hills as people have destroyed their spiritual homes, some believe it’s a snake that moved the earth and open the clouds. It sounds ridiculous though even elites and the majority of Sierra Leoneans believe this myth. One begins to wonder what the future holds for Sierra Leones community and environmental challenges. As social workers and looking at the amount of work done on community and environmental sustainability blame it on our long interaction with our environment, modifying it with disregard to disastrous consequences as we experience now as well as weak institutions responsible to ensure for proper environmental protection. The main features of environmental degradation in the country posing threats to our survival are deforestation, pollution of air and water resources, stone mining, urbanization leading to overcrowded settlements, inadequate food and disease, over exploitation of vital resources and land grabbing.

The president’s pronouncement touches on sustainable lifestyles for our sustainable futures and that the environment should be treated as our natural partner. He reiterated government’s commitment with support from its local and international partners to ensure for community and environmental sustainability.

The challenges seem overwhelming but we are gradually coping to ensure for professional service delivery as all hands are on deck. What would be helpful at this preliminary stage is based on the needs identified on the ground….

First steps first… getting proper shelters with warm beds, clothing, proper meals and listening and sharing their woes is one step to the healing process….some are already in the process but the majority are waiting to receive such services. Any funding support will target this first stages specific to children under ten years, lactating and pregnant women and the aged seen as most vulnerable.

Separating all children over ten years orphaned by this disaster from the general crowd by relocating them to interim care centres to be managed by social workers. This will allow for proper care. Distance family tracing will be effected to reunify them with close relatives and ensuring for their education and general wellbeing.

Children living and working on the streets showing up at registration centres and in the crammed shelters had already been documented and would require a separate shelter to listen to their ordeals for documentation and the other processes leading to their reunification with their families with proper arrangements for their education and general welfare.

Moving around crammed interim holding centres and rendering support require constant mobility…vehicles and motor bikes on loan to our association are due for return by the end of the month…this will affect our voluntary operations. Funding support will also drip on that line to facilitate our operations.

Professional advice on disasters of this nature will be appreciated and in the long run international volunteers would be welcomed to Sierra Leone to render professional support in our operations.

Community and environmental sustainability campaigns will be intensified as this is one good moment to educate the populace when all eyes are on the environment and community.

We are already doing preliminary arrangement to ascertain cost of ideal homes available for rent, available land space offered on a rent free basis to erect  an interim home for children, getting few motorbikes, cost of appropriate relief items available in the communities, allocating volunteer teachers, nurses and care givers when once we set up newer centres.

The relocation exercise from school buildings needs to be stepped up as schools will resume after the summer break in last week of September. This will allow for disinfecting and doing major repairs on such buildings.

Affected children have to be enrolled in school in their new communities….this will include providing the necessary support to ensure that.

If and only if feasible, an ambulance, motor bikes and pick up vans would be ideal for our operations

Solar lamps will also be needed to light up shelters. Outdoor and indoor games would also be ideal especially for the children

Office supplies would also be needed such as handy laptop computers preferably for the tropics, portable printers and stationery materials for administrative purposes to meet with the data processing challenges at hand.

Its wet, wet, wet….. the need for protective rain clothing and boots for all victims stands out