This report is writing by Dr. Silvana Martinez, IFSW President, after her Meeting with Dr. Alicia Kirchner 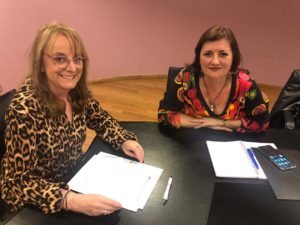 The Global President of the International Federation of Social Workers (IFSW), Dr. Silvana Martínez, met this Thursday, September 26, in Buenos Aires with the Governor of the Argentine Province of Santa Cruz, Dr. Alicia Kirchner, in a work meeting listed by both as fruitful and promising in terms of future actions. Ms. Alicia Kirchner, in addition to being an important political leader of Argentina, recently re-elected Governor of the Province of Santa Cruz with broad popular support, close to 60% of the votes, is a Social Worker, Doctor in Social Work, served as National Senator and Minister of Social Development of the Nation for more than 10 years, among other public positions in which she stood out for her academic and professional training, her social and political commitment and her management capacity.

Among the issues addressed in the meeting are the Global Agenda for Social Work and Social Development, the actions that the IFSW has been carrying out in this management period by Dr. Silvana Martínez and the importance it has for Argentina and for Latin America and the Caribbean that an Argentine and Latin American Social Worker is in the most important place of Social Work worldwide.

In addition, many other no less important issues were addressed, such as the social reality of the country, the serious social problems that Argentina is going through and the enormous challenges that the new government will face on December 10. The distressing social, political and economic problems that directly, deeply and unequally affect millions of human beings who make up the most vulnerable population worldwide were also addressed.

One of the most important results of this meeting, regarding Social Work and Social Development, is the Political Agreement reached for working together between the International Federation of Social Workers and the Government of the Province of Santa Cruz, defining a concrete work agenda for the coming years.

Dr. Martinez referred to this, saying “I am very happy that the colleague Governor Dr. Alicia Kirchner has received me today. It was a wonderful meeting where we were able to talk about many issues of vital importance for the profession and society. It is really admirable the management that Alicia is doing as Governor, she has taken the province of Santa Cruz from a deep crisis without firing any worker, prioritizing respect for human dignity, respect for workers, respect to Santa Cruz and the strictest respect for Human Rights, Social Justice and Democracy as a way of life. It is a source of great pride for Social Work to have a leader like her who, from the politics and principles of Social Work, has put her experience at the service of the People, with the deepest conviction and social commitment. Undoubtedly today is an example of governance for our decimated Argentina”

The issue of Federal Social Work Law No. 27.072 sanctioned on December 10, 2014 when Dr. Silvana Martínez was President of the Argentine Federation of Professional Associations of Social Service and Dr. Alicia Kirchner was Minister of Social Development of the Nation. Dr. Martínez also referred to this, expressing that “it was a very emotional moment of the meeting, because we have worked hard to realize the dream of thousands of Social Workers of Argentina who fought for more than 60 years to have a national law. Without the political support of colleague Alicia Kirchner, this bill would not have been sanctioned. I personally am very grateful for the resounding support that Alicia provided to the FAAPSS during my presidency and to the draft for the Federal Law of Social Work that we elaborated in the FAAPSS, promoting its sanction by the National Congress and its immediate promulgation by the then former President of the Nation, the current National Senator Cristina Fernández de Kirchner ”.