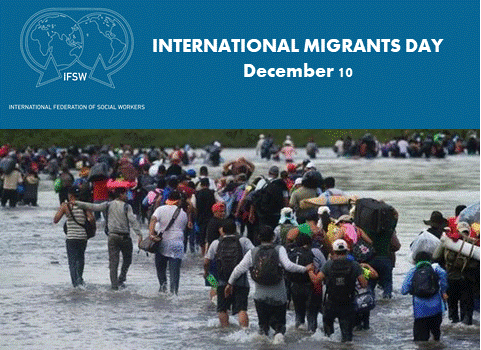 The International Federation of Social Workers (IFSW) Human Rights Commission observes International Migrants Day to honor and advocate for of all migrants and their human rights.

There are over 70 million people who have been forcibly displaced by war, civil conflict, state terrorism, food insecurity, water shortages, and natural disasters. Women, men, and children, many of whom flee their countries unaccompanied, risk their lives as they seek safety and sanctuary. Many undertake desperate measures – crossing treacherous seas in unworthy boats, forming a caravan of people walking from Central America to seek asylum in the USA, attempting to swim across the Rio Grande River, and others travel in the container of locked trucks and often perish. Many fall victim to human traffickers and smugglers.

Refugees face perilous circumstances in their countries of origin and through no fault of their own must leave their homes, villages, farms, livelihoods, friends and families to embark toward unknown futures. There are very few resettlement centers to assist them as they transition to a new life. Indeed many languish for months and even years in inhospitable camps or settlements on borders at the margins of society waiting in legal limbo as governments increasingly find ways to turn them away, detain or deport them.   Today, thousands are camped outdoors in streets and parks on the southern side of the US- Mexico border awaiting a chance to present their asylum petition to federal authorities. The vast majority of their petitions are denied and they are subject to the predations of criminal elements and exposed to the bitter cold of desert nights. Thousands of migrant children have been separated from their families in the United States and have been held in camps, tents and cages leading to irreparable harm to child development.

Conflicts around the world have displaced millions. The Syrian conflict has displaced 6.7 million. Over 2 million have fled South Sudan and nearly 3 million have been forced from Afghanistan. Over three quarters of displaced persons worldwide relocate in a neighboring country, which is typically ill-equipped to support them. A comparative handful make it to Europe or North America. Fully 37,000 people a day are forced to flee persecution and conflict.

Even though migrants and refugees can make immense contributions to their host countries, governments, fueled by populism, nationalism, and xenophobia are creating growing physical and legal barriers to their entry and resettlement.

There are international rights and standards to protect the rights of migrants and refugees, but it is incumbent upon citizens everywhere to hold their governments accountable to provide sanctuary and refuge for displaced persons and to protect their rights.

On International Migrants Day, we strengthen our commitment as social workers to pressure representative governments to honour their legal obligations to refugees and displaced persons and to make the needed investments in foreign assistance to improve the conditions in the countries so that people need not flee their homelands. We pledge to give of our time and resources to reduce the unneeded and avoidable suffering of those who face persecution and discrimination in their countries.