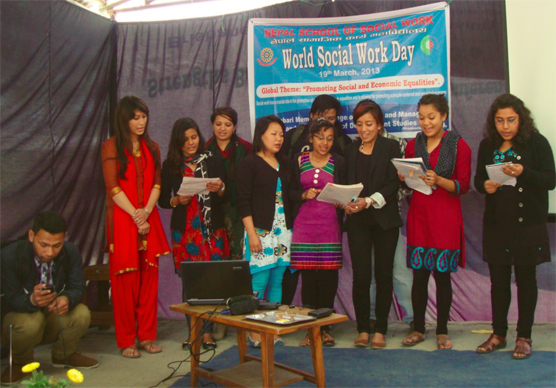 Nepal School of Social work has celebrated World Social Work day on 19th March 2013 with the global theme of “Promoting social and economic equalities” in college premises. The inauguration program began with lightening of lamp jointly by Chief Guest Prof. Keshav Kumar Shrestha and Pradipta Kadambari, Board Chair person of NSSW.
The program began with the drama named Bachieki Cheli (trafficked Girl) performed by Nepal College of Development Studies II year (New) students. The main objective of the play was to highlight the emerging social problem of women trafficking and HIV AIDS. The play focused on role of social worker as a unified entity to sensitize the society. The Sangharsa project video clips were presented by Kavin Tse, an AYAD and representative of National Micro-Entrepreneur Federation Nepal focusing on pertinent issues of rural life of Nepalese women. The video clips highlighted the success stories of women entrepreneurs of marginalized women of different communities of western region of Nepal.

Kadambari Memorial College 3rd Semester students sang a song with the theme of peace and love HEALS THE WORLD. Students of Kadambari Memorial College (VSemester ) presented their library project activities implemented Dhading district. The students shared their mutual efforts for book collection, fundraising and challenges to establish library for rural children.
The Chief Guest of the day long program Prof. Dr. Keshav Kumar Shrestha, Director of Curriculum Development Centre, Tribhuvan University, Kirtipur addressed the function and urged the students to work to realize the theme of the day and its importance in their actions as well.
Prof Shrestha at that time shared good news among all the participants that Tribhuvan University is launching the MSW programme from this academic year. He also requested the BSW students of NSSW to explore other hidden serious social issues bring them into lime light and advocate in the same way as they presented in the drama.

The Chair of the executive board of Nepal School of Social Work, Mrs Pradipta Kadambari expressed her best wishes on the occasion of World Social Work Day. She shared that students field work activities, play, and library project were really appreciative and she felt proud of it. She recalled the vision of the founding Director of Nepal School of social work Dr. Bala Raju Nikku “Nurturing Young Social Workers to Create a Just Society”. Her inspiring speech concluded with the need of commitment, honesty and professional social workers in Nepalese society which is transforming at this point of History. She also thanked all the committed faculty members and students who made NSSW a place of great learning and institution of national prominence.
The guests of honour representing Peace for Nepal, Dr. Sushil Koirala expressed his best wishes on celebrating World Social Work Day.
The chairperson of this program Dr. Dilli Ram Adhikari, Principal of NSSW expressed vote of thanks to the guests, students and faculty members for their active participation for making the program a meaningful and successful.

The chair of the program highlighted on global theme “Promoting social and economic equalities” and social workers must focus on psychological, physical and mental aspects of promoting socio-economic equality. He also thanked Dr. Bala Raju Nikku for his devotion for promoting social work practice in Nepal by creating network and linkages at national and international arena. The chairman also informed about the activities of NSSW and updated about the upcoming international conference on Child friendly Cities which is going to be held on June 27-29 in Kathmandu under the aegis of Asia Pacific Child Frinedly Cities Network. Dr. Adhikari congratulated TU second year students on achieving 100% results in annual examination and officially announced the closing of the program.
It was meaningful day for everyone to reflect on the social work profession and crucial role of social workers in post conflict countries like Nepal. Celebrating World Social Work Day since 2007 by NSSW is a unique event through which it aims to reach Nepalese society and seek wider recognition for social work as a profession.
The programme was Coordinated by Ms Samjhana Bhetwal and conducted by Mr. Keshav Nepal.