During the IFSW 2016 General Assembly held in Seoul, Korea elections were held for seven of the twelve global executive positions. Elections take place every two years during the General Assemblies. 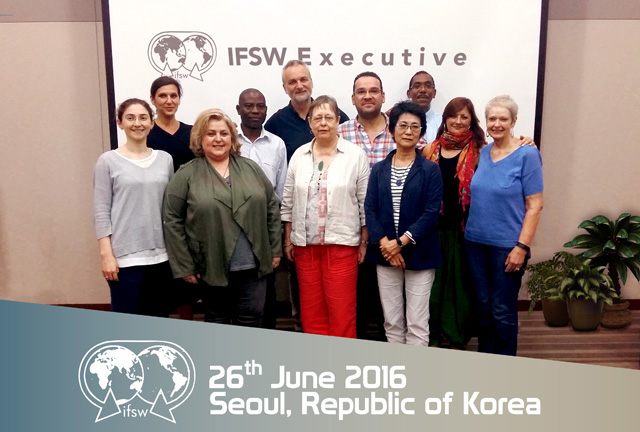 Dunja Gharwal from Austria was elected unopposed as Treasurer.

Noel Muridzo from Zimbabwe was elected as the African Regional President, and was later appointed by the executive committee as the Global Vice President of IFSW.

Rose Henderson from New Zealand was reaffirmed in her role as Regional Deputy President for the Asia-Pacific Region. (The position was formally called Member at Large but changed during the General Assembly as a part of the Constitution Review)

At the executive meeting following the elections, Global President Ruth Stark warmly welcomed the new members and said that she was excited about the future work of the executive building on the successes of the past executive. She thanked the outgoing members for their hard work and contributions to the profession.

The IFSW Secretary-General Rory Truell and Global President Ruth Stark held an induction programme for the new executive members following the elections. The executive meets through online platforms and will next meet face-to-face in Zambia coinciding with the 2017 African Regional Conference.