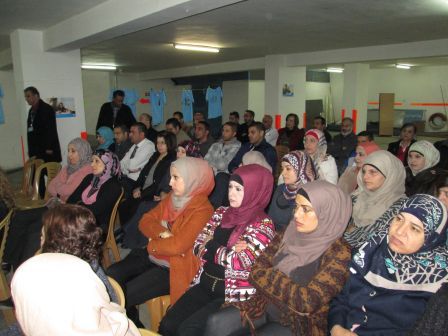 From 25 November, the International Day for the Elimination of Violence against Women, to 10 December, Human Rights Day, and the 16 Days of Activism against Gender-Based Violence Campaign is a time to galvanize action to end violence against women and girls around the world.

UNRWA, through its Relief and Social Services Department, together with the Gender task force, continued with its variety of activities led by “Women programme ” has lunched several activities and initiatives to commemorate this occasion in refugees camps and outside the Campaign which focused this year on the importance of educating families and women in particular Launched under the slogan :

“From Peace in the Home to Peace in the World: Make Education Safe for All!” Included workshops, awareness lectures, human rights activities, movie show, Stress Management for women with disabilities, session for women to discuss the important of education, Open discussion session for male staff about female education.

UNRWA is joining other UN agencies, organizations, governments and countless individuals for the campaign to raise awareness on GBV and human rights, several meetings were held with different NGOs in WB to increase cooperation for better response to gender- based violence. Women are the basic and the main pillar of their families. The national Palestinian frame of law should be finalized to protect women culturally, socially and psychologically in addition to empower women economically and liberate her from any kind of political violence.

The campaign continued to raise UNRWA’s staff awareness on GBV. 400 employees from different UNRWA health and education departments and others were participated.