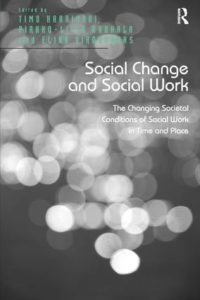 This work, described as a ‘jubilee anthology’, is written by a group of contributors united through their commitment to scholarship and their research network connection with Mirja Satka, Professor of Social Work Practice Research at the University of Helsinki and the Heikki Waris Institute. The three editors, social work academics at Universities in Finland, published it to celebrate her 60th birthday. It certainly contributes in a meaningful way, to the critical discourse on the shaping of social work and its mandate in current changing societal conditions.

It does so through some interesting explorations. It rests its theoretical arguments on a late-modernity frame with the proposition in the first chapter, that the problems of late modernity have created a new structural basis for social divisions, solidarity and cohesion. The trends and ideologies of advanced economic liberalism, competitiveness of nation-states, unequal distribution of resources, have led to social instability, a risk culture, ruptures in solidarity and insecurity. Rejecting ideas of post-modernity, they frame their argument in terms of the fundamental changes of the period of ‘second’ or ‘late’ modernity. The writers argue that it is within these changing contexts that social work must find its place as contributor to social change rather than settle for the imposed tendency towards governing risks. It explores the political nature of social work; describes methodologies of robust knowledge production; interrogates conservative neoliberal ideologies and their impact on social work service provision; and describes research and practice using conceptual frameworks such as gendered perspectives, phenomenology, Bourdieusian and genealogical approaches.

The chapters in the first part examine how social work has fluctuated within the frameworks of liberal, social-democratic and conservative positions in Europe. However, it is argued that what has remained consistent in these various political positions, is the implication of social work as a tool to ‘manage’ and contain social problems, social relations and class conflict. Although early social work pioneers seemed to embrace principles such as social justice and solidarity, the post-Fordist, neo-liberal ideological shifts with characteristic managerialism and bureaucratisation have led to an escalation of the social control and status quo maintenance character of social work. In the punitive state with criminalisation of the poor, social workers have become part of surveillance and disciplinary technologies. Social workers are called upon to reflect upon, resist and defy these arrangements.

There is a wide range of content around the theme of social work and social change, which social work academics as well as practitioners would find useful and engaging. An interesting chapter on social work education for example, argues for the importance of content around political action and provides suggestions for knowledge, skills and teaching methods for politically oriented social work. The chapter about the negative effects of instrumental rationality and the need for deeper understanding of human experience through phenomenology, explores its contribution beyond the individual’s ‘interiority’, to the broader lifeworld and the social. Not only are ideas such as the ‘amphitheatre of collective meanings’ and Pierre Bourdieu’s habitus and field explored, but also the contributions of phenomenology in social work such as among others, in interpretive phenomenological analysis in research, constructivist social work, social pedagogy and existential therapies.

Further chapters include content such as an exploration of the production of ‘socially robust context-sensitive knowledge’ for both local and global conditions, through studies using research methodologies like multilevel frameworks and context-sensitive reflection; gendered and critical perspectives on contradictions between emancipatory and paternalistic interventions aimed at labour-market integration and welfare benefit cessation; the use of a feminist qualitative research approach in understanding complexities around mother-daughter relationships in the context of substance misuse; the use of a genealogical approach to problematise and understand discourses and practices in child welfare and protection in the Irish and Finnish contexts; and finally, using a Bourdieusian conceptual framework to understand complexities of using lay volunteer support persons in child welfare services in overlapping fields of child welfare, the family, and civic action, within a broader context of privatisation and outsourcing of services.

The volume arouses in the reader both dismay at the decline in social work’s contribution to solidarity and social citizenship on the one hand, and hope that through reflection and commitment to theoretical rigour social work may retain its commitment to and ethical stance towards social wellbeing and justice, during substantial social change.

One of the strengths of this volume is that although the focus is on Nordic and European contexts, the structures of late modernity and neoliberalism are evident in the broader global context with a clear impact on social work generally, thus making it relevant also for international readers. Despite this, the international reach may be somewhat limited by the broader contexts of gross inequality, poverty, failed development and post-colonial realities. Although the theoretical content is universally relevant, the application would require a broader interpretation that takes these contexts into account.

Each of the chapters make an important contribution to the volume, combining rigorous theoretical engagement with sociological as well as familiar contemporary social work theorists; practice realities; research findings; and case studies. Throughout the volume an appeal is made for social work to reflect on and resist what the globalising economy and its macro structures impose on social work, namely a departure from its mandate to aim at social justice, social cohesion and emancipatory citizenship. However, what seems to be missing is a radical approach of being a critical theorist and revolutionary activist (Callinicos, 2011) seeking to understand changing social structures evident in society in order to overthrow them. The inclusion of more content around this resistant and radical perspective for social work activism may have strengthened a sense of hope and, as stated in the concluding chapter by Mirja Satka, to whom the volume is dedicated, the development of “an exciting vision for the future aims and profiles of social work” (p.194).

Linda Harms Smith is a lecturer at Robert Gordon University, Scotland and before 2015, a senior lecturer at the University of the Witwatersrand, South Africa. She is a Steering Committee Member of the Social Work Action Network and is on the Editorial Boards of the International Social Work Journal and the Critical and Radical Social Work Journal. Her PhD was on social work knowledge, ideology and social change. Her publications and research interests relate to social justice, transformation, social movements, collective trauma and post-colonialism. She practiced as a social worker in South Africa in Community Development and Child Welfare Services. l.h.smith@rgu.ac.uk 01224263201