On the International Day for the Eradication of Poverty, social workers call for partnerships to transform poverty. IFSW Secretary-General, Rory Truell writes:

Today is the International Day for the Eradication of Poverty which is also the first objective of the United Nations’ Sustainable Development Goals. The transformation of poverty is core to social work. A subject which the profession has significant experience with and has developed ways of working which are making a substantial difference in the lives of many.

During my last visit to India last month, I met Anusha, a young woman living in the slums of Bangalore. During our conversation, I asked her what changes had taken place that enabled her to have the choices of going to university and new freedoms that did not exist a few years ago. She lifted her eyes gazing down the colourful alleyway where she lives observing the children playing outside the communal toilet, “It started with the woman’s empowerment groups and when the social workers helped our mothers to ban child marriages. Suddenly I had a future’, she said.

Anusha is a woman in her twenties who is watching her slum in India transform. As well as each block having a woman’s empowerment group, the groups combined have formed a system of democratic governance that is step-by-step, changing the lives of all the residents. Amidst other measures, together with social workers, they have banned on child marriages, developed community-wide campaigns to stop domestic violence, established primary and secondary schools within the slums, set up partnerships and pathways to transition the students to universities, established informal systems of social security and they regularly run workshops on economic and social empowerment, nutrition, health, family planning, parenting and hygiene.

In 1992, the UN established the International Day for the Eradication of Poverty, but there are a lot of misunderstandings about how to eradicate poverty. Jino Joy, the social worker who introduced me to Ansuha and other residents, said that each of the multi-layers of community support are important in the transformation process. He explained, “Social transformation starts by listening to what people want and bringing people together. Sometimes the residents will want different things, and we call meetings to support them to set their own priorities. Sometimes it is about working with individual families on their unique needs, but it is never so simple as putting one or two programmes in place. It is an approach of addressing the many issues to support their (the communities) vision for a new future.”

In Zambia, Joachim Mumba, IFSW Regional Vice president told me. “From a ground-up African development perspective, the term Eradication of Poverty is complicated”. He likened it “to switching off a light”, and with a knowing shrug said, “you can’t just switch off poverty you have work where people are at and from there transform the all the economic and humanitarian issues to permanently lift people out of poverty”.

Throughout the world: Latin America, North America, Europe, Asia and Africa, we can find social work examples for the transformation from poverty. We also hear many social workers echoing the same concerns as Joachim and Jino. Ending poverty requires an in-depth knowledge of the local people and heightened skills in supporting communities to articulable their own solutions to the complex environments they live within. It is not easy work, but it produces a magic that the people, politicians and officials never expected.

Anusha demonstrated this in India. She proudly invited Jino, other social workers and myself to her dwelling. It was up narrow crumbling stirs, perched on top of two other slum houses. In the one multipurpose room used for her children’s sleeping, the family eating and living, she showed us the photos that decorated the walls and explained that her husband was able to take a cheap loan from the slum cooperative that enabled him to buy a taxi and now they have a regular income. She said she enjoys the community’s workshops because, as well as learning, the participants support one another and she knows that her children will go to school, and like many of the slum woman of her age will go to university.

On International Day for the Eradication of Poverty, let’s not oversimplify the complex structures of poverty transformation reducing the concept to only access to education and health programmes as is so often discussed in the media and development reports. Let’s talk about partnerships between people, social workers, other professionals, communities and the Sustainable Development Goals. Let’s together – people, professionals, social services, governments and international agencies, – find common strategies that replace poverty with a rights-based thriving, positive and confident communities. 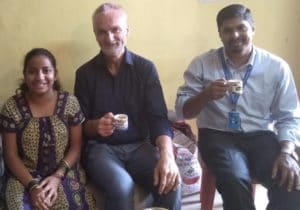 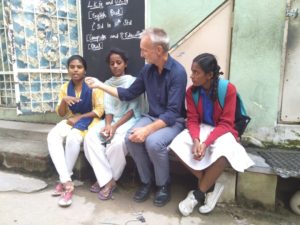 Rory interviewing three young residents in the slum, two who are studying for their Bachelor’s in Business studies at a local University and a girl who is in one of the slum schools. All are positive and excited about their futures.