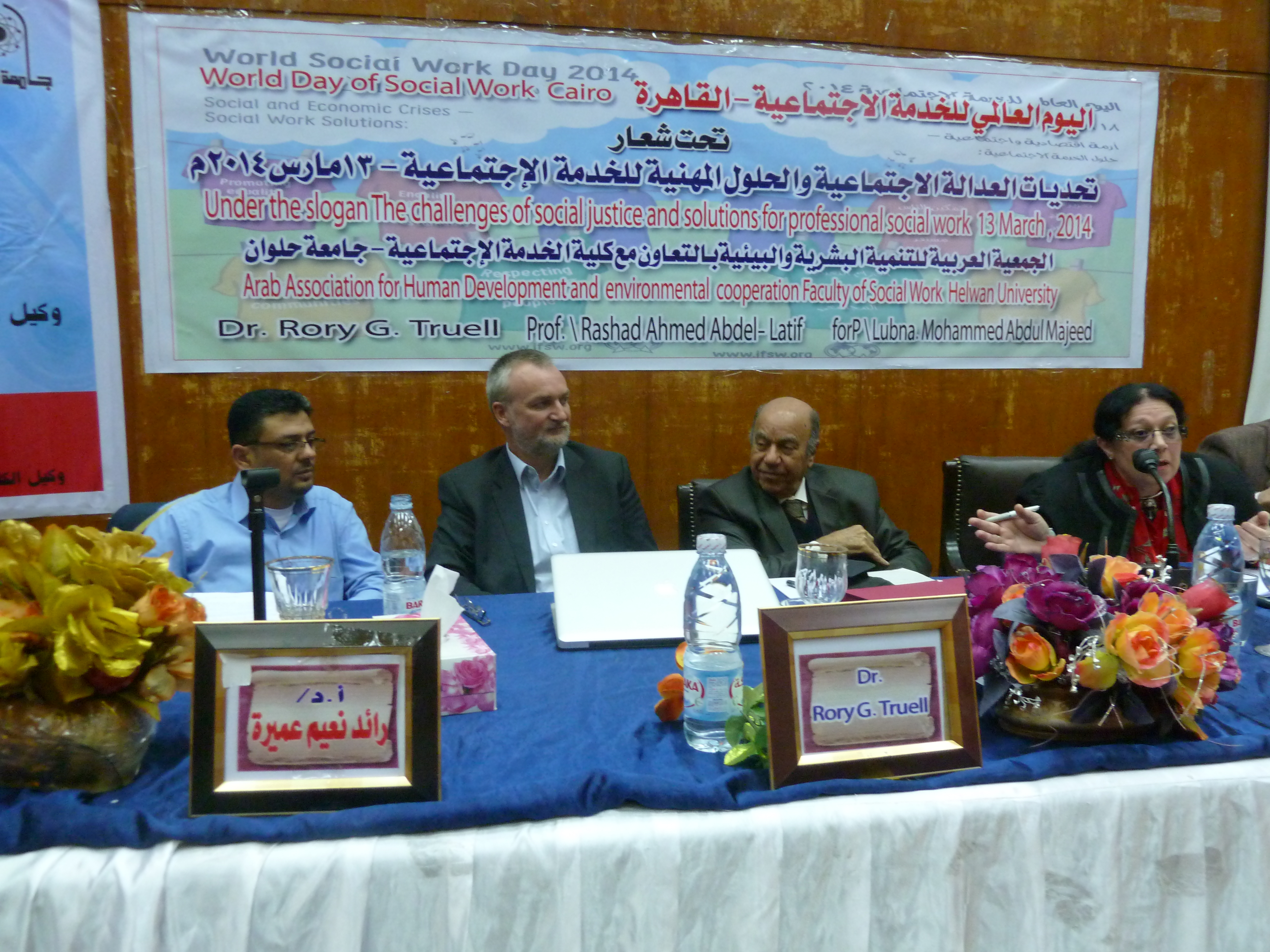 Social workers from throughout Egypt and international guests from Palestine, Yemen, Sudan and Germany meet at Helwan University in Cairo to celebrate 2014 World Social Work Day.

The theme of the day was, ‘Social and Economic Crisis – Social Work Solutions. Dr Rory Truell, the Secretary- General of The International Federation of Social Workers, said that this world-wide theme had been chosen to both celebrate social work successes, and to remind governments and policy makers of the unique and significant contributions made by social workers which focus on social sustainability.

“Social workers” Dr Truell said, “understand what policies work for people and what policies fail people”. He highlighted that social workers have learnt that people cannot be developed by others. “Our frontline experience has taught us that to escape from poverty and oppressive situations, people need to be actively involved in their own futures”. He also commented, “That the cornerstone of a thriving economy is a stable and resourced community. All to often governments argue that they cannot afford to invest in community, whereas our experience informs us that investing in community creates stability and confidence that attracts entrepreneurship, skill development and economic growth”.

Mr Raed Amira discussed social work in Palestine and the challenges of working under military occupation. He spoke about the dangers for social workers working in conflict areas such as near the Israeli wall that prevents Palestinians from crossing into Israel, settlements areas, or military camps. He explained, “The Palestinian Union of Social Workers and Psychologists has needed to develop new models for crisis intervention, “Because of the terrible affects of the occupation on our people we have had to ensure that community development is at the centre of counselling process”. Mr Amira said that applying the principles of social work is very important to keep Palestinian people feeling confident and looking forward”.

Dr Massad Aweys from Helwan University discussed the contribution from social work on creating and maintain dialogue between individuals to breakdown conflict. He noted that social work also encouraged dialog wherever possible between people, groups and organisations and suggested that the social work approach should also be extended to attempt to reduce conflict between Arab countries.

Lastly Dr. Lubna Abed Al Majeed spoke on strategies needed to reduce underage marriage. She said, “This is a large problem in Egypt bought about by a mix of poverty and culture”. Her proposal was to bring together the Ministry of Social Affair and the Ministry of Education so that they work together to provide specialised education to all Egyptian students on the dangers underage marriage. “By running this education in schools the messages will be able to reach all families”, she said.