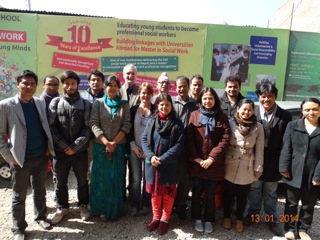 By Dr Rory Truell, Secretary-General for The International Federation of Social Workers. 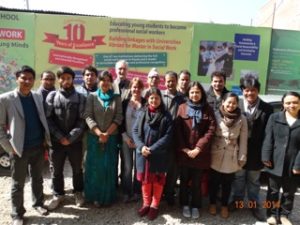 Nepal is a country in transition and social workers are playing a significant role in advocating for rights-based and capacity building social protection systems. It was a great privilege to be invited by the of Social Workers Association of Nepal (SWAN) to visit many social work projects, advocate with government representatives, and partake in discussions on the development of social work education that will expand the workforce.

Social work in Nepal is relatively new. A handful of pioneers have championed the need to develop social work education and training over the past two decades and now the profession is developing momentum.

There are many social challenges in Nepal. Its population of 26 million comprises of over 130 ethnic groups, 90 languages and isolated rural communities living in poverty. Many populations hold to ancient practices as their only option for survival, and often the rights of women and children have not advanced. Nepalese social workers however are striving for a new society that is based on balance of both their cultural values and the rights of all members of the community.

One social work initiated project I had the pleasure to visit was the community radio station network. The network reaches communities that cannot be easily be accessed by road and is broadcast in all the nations languages. The network explicitly based on human rights and development provides a mix of entertainment and interactive social discussion. To populations that cannot read or write, that have no access to television or the internet, the radio provides the only link to new ideas and concepts of social change.

Punkkali and Liaisa from the remote Kalokot district said: “We like the news but also the educational programmes which challenge what used to be taboos. It was through the radio we learnt the women should not be kept in isolation during menstruation. Also child marriage used to be common; children would be married as early as at the age of 12 or even 10. We rarely see that anymore. As women, we no longer want our children to marry young. That is a great extent thanks to the information we have had through the radio”, they said.

The radio network promotes democracy and advocates for women’s involvement in politics. In a country that legally restricts women’s political involvement to no more than 33% of elected officials, the social workers have a big challenge. “We wanted to counter the myth that women cannot take leadership positions and action with out men” said Kamala Kadel, one of the radio networks founders. The people that listen to the radio feel that it is theirs. They contribute to the programmes via SMS and take action on the information.

SWAN has only recently formed (joining IFSW in 2014) but it signifies a major milestone in the professional development of social Work in Nepal. The Association President Dr Dilli Ram Adhikari said, ‘The challenges that now lie ahead are to create consistency and common standards in social work education and practice, and to encourage the government to recognise that social workers add significant value not just in human terms but also to running a healthy society’.