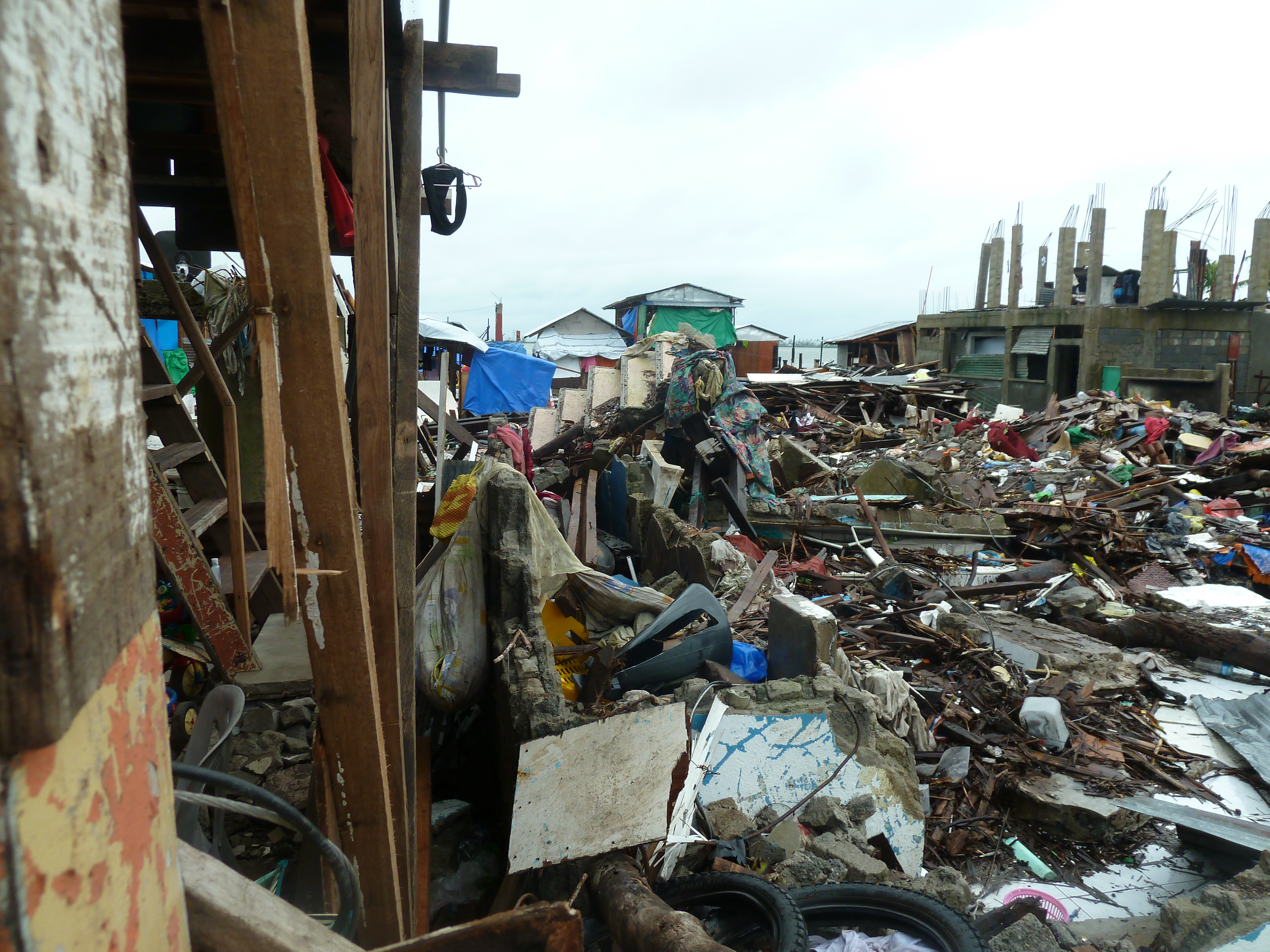 Hosted by the Philippines Association of Social Workers, the Secretary-General of The International Federation of Social Workers (IFSW), Dr. Rory Truell, visited the areas affected by Typhoon Yolanda last November. This is his account of his visit to one of the devastated/affected communities – Tacloban:

The peoples of the Philippines know about hardship, surviving poverty and resilience. The Pilipino social workers working in Tacloban also have these strengths and more. Not only do they endure the same conditions as other survivors – they are also assisting people everyday to restore their lives, debriefing the survivors of the trauma whose lives and families were utterly shattered in a single moment of time.

Listening to and watching the social workers, it is clear that they are having a positive impact because they involve the survivors in their own social development, facilitating them to work together to rebuild their confidence, purpose, and dignity – to take control over their own futures.

The social workers of Tacloban told our visiting delegation that their resilience and ability to continue practicing come both from their culture and their social work training. This particular group of social workers, however, are living in the almost totally devastated coastal fishing communities caused by Typhoon Yolanda last November, killing approximately 10,000 people. These social workers, who are also survivors, have worked everyday since November 8th, despite their own trauma and loss of family members, colleagues, houses, clothes and treasured positions. They have heroically put their communities first, seven days a week for two and a half months – and naturally they are now exhausted.

From the first moments of that catastrophic day, the local social workers played a critical role. One died on duty trying to help others to get to a safer place and another is still classified as missing. All the social workers themselves carry the immense pressure of trauma.

Describing what happened to himself on that day, a very senior social worker told us that he was trapped on the top of a two story building with the water raising so fast there was only a short time before he and others would be swept away. On a taller building on the opposite side of the road other people were able to toss a rope that could be secured between the buildings and with great difficulty the social worker supported people to wrap their arms and legs around the rope and pull themselves towards safety above the water streaming with bodies and debris below. The social worker was the last to leave the flooding two-story building and no one was able to assist him and stabilize the rope. He told us, ‘I was sure I was going to die and I shouted to the others on the in the building across the road, ‘Please just take my body home’. He did make it across, but how, he can’t remember. The deep lines and constant stiffing of his facial muscles to hold back the emotions echoed his next comment: ‘It’s still in my dreams and in my day’.

Another social worker told us that she was in one of the designated safety buildings. But unexpectedly it started to flood with the surge of water pushed up by the 315 kilometer winds. “People panicked”, she said. “They were trying to rush up the stairs as the water came up around them”. She paused and looked to the ground, recalling the vision, “They trampled over themselves, the children”. She threw herself out of a broken window into the gale and climbed a power pole with strength she didn’t know she had, and from the top she thought of her children who were at another part of the village while she watched the sheer horror below.

At first, the social workers of Tacloban played a key role in assessing the damage to the community and advising rescue and medial teams. The focus was on getting food and supplies to people who had lost all material possessions and who were dazed and in despair. Now, their role is to provide authentication for the victims as their birth certificates and other paperwork were all destroyed.

This is critically important because authentication gives the survivors a legal status, and once the international agencies have left, such status could be the difference between surviving or not. ‘Having a legal document saying who they are helps restore their dignity’, one social worker told us.

On our visit, the faces of these social worker spoke the words they did not want to say: Expressions of trauma, holding back their own experiences and utter tiredness. ‘We have to stay strong, we have to keep doing our job’, a social work told us at the authentication desk with a long queue of waiting survivors. I asked her a personal question, knowing that it had the potential to disrupt her protective shield, but a question that would help us understand how we could help: ‘When do you have time to cry?’ She bought her hands to her face and, after a lengthy pause, she wiped her expression away, stood tall and said, ‘I cried once when my husband and children told me that I had been officially declared dead – but I can’t cry, we need to do this job’.

The situation of the social workers is a reality. There is no one else to do their jobs. The international agencies are focusing on rebuilding and supply of clothes, food and immediate shelter. The social workers attend to the social dynamics: the trauma, the grief; and another issue that potentially could victimize the survivors further for the rest of their lives – trafficking.

Trafficking is the major issue for social workers throughout the Philippines. Mostly it involves children but adults are also smuggled out by boat, often through Malaysia, before they are sold to other traffickers that force the victims to work in prostitution or domestic labour in Europe and elsewhere. The severe disruption of the typhoon in affected communities leaves many more people vulnerable to traffickers.

Since the first days of the typhoon the social workers of Tacloban patrolled the ports and educated the port workers to report anything that looks suspicious. They also provided education to the surviving communities about taking care of the vulnerable children. Without social workers, no one would be paying attention to these tasks, so they feel the responsibility to report to work each day despite the pleas from there families to give attention to their own family trauma.

We asked the Tacloban social workers what they needed and how the international social work community could assist them.

They know that social workers throughout the world are not well resourced and that help can only be limited. One social worker replied: ‘Our fear is that when the UN and international agencies leave, they might have cleaned up the roads but not the pain and the economy’.

The international social work community cannot provide funds to assist the survivors to move from living under plastic sheets and on top of the rubble that still holds the bodies of the missing. We cannot rebuild the schools so that the children can piece together normal lives. These are the responsibilities of governments and the role of the social workers is to advocate with and on behalf of the affected peoples on how such money should be deployed. But there is still the reality that social workers in the typhoon-affected areas are not well supported by an overstretched government. The international social work community CAN respond by supporting their colleagues to perform their work safely and without such sacrifice to their own families.

Last November, IFSW and the Philippians Association of Social Workers called for support from IFSW members. Immediately the IFSW member organisations in Japan and others responded with donations. I mention Japan as it was only two years ago that they suffered the horrific affects of a tsunami. Social workers from around the world responded then by donating what funds they could. Now the Japanese social workers are supporting their counterparts in the Philippines. This is a demonstration of social work solidarity at it highest and IFSW will honour those contributors at forthcoming General Meetings.

But there is still more to be done in Tacloban and in other areas of the Philippines devastated by the typhoon. The social workers are ensuring that our global professional values of ‘capacity building’ and ‘community involvement in the decision making’ are upheld and translated into action. The social workers are halting a new tide of trafficking survivors, but they need our support.

The Philippine Association of Social Workers has put together a package of support that will provide some immediate relief to the social workers at the front line:

2 The second part of the package is to arrange for social workers from other areas within the Philippines to stand-in for the social workers in Tacloban and other affected areas, allowing them to take a break form their professional service and to spend time with their families and to grieve themselves.

3 Part three involves arranging financial support for recreation breaks for the Tacloban and other affected social workers. Such breaks need to be away from the devastated areas, allowing the social worker and her/his family to find space to recuperate so that they can again face the challenges of rebuilding their own home communities with real energy.

Filipino social workers from the non-affected areas have embraced this package and are willing to volunteer as debriefers; to carry out the authentication work or any other duties required. But they also have resource shortages and the costs of the flight or boat trips to Tacloban cannot be found easily from the salaries of social workers who are working in an economically deprived situation.

Support from the international social work community is needed. Donations from IFSW member organizations will help stop the burnout of colleagues who are heroically supporting survivors.

To make a donation – big or small – please donate directly to the Philippine Association of Social Workers PASW and they will make sure your all of your donation goes to fund the 4 point package described above. Messages of support can also be sent directly to the PASW email:

It is wonderful to be a part of an international social work family. Two years ago it was Japan, now it is the Philippines. As climate problems grow, we now know we can look after each other. As social workers, we don’t just see the statistics of the 10,000 who died. We see human stories and the effects upon the next generation – and we can see our role as humanitarians and defenders of human rights.

To see more information and photos of the Typhoon affected areas follow Rory Truell’s updates on his Facebook page: https://www.facebook.com/rory.truell.9

See also this article in The Guardian newspaper online.