Dr Rory Truell, IFSW Secretary-General was invited by the  Association of Social Workers Bangladesh to visit a number of their projects. This is his account of their work with the Wastepickers of Dhaka 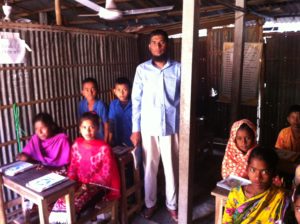 A teacher and students at Grambangla School

A small amount of funding can go along way in the right hands. Social workers from the Association of Social Workers Bangladesh accessed funds from the Dutch Trade Union Movement to start and run Grambangla School for the children of the Wastepickers of Dhaka. The school is contributing to transforming lives but the social workers actions go much further.

The Wastepickers are the poorest of the poor, a people without recognition. People who work in the high mounds of rubbish sorting them into piles to be sold for new uses. Bones that once sat on dinner plates, or the rejected rubbish of butchers, is sold for carving material. The glass, metals and plastic are taken away to be recycled.

Physically, Grambangla School is very basic. It sits between mounds of waste. The classrooms are dark; lit only by the dust thick light from the doorless entrance ways. Bamboo poles hold the iron sheet walling and rocks secure the roof. Hanging on the walls are colourful posters: a world map and the alphabet in Bengali and English. Everything is coated by the dust and stench.

Not all children go to the school, mostly because there are not enough places, and some of the parents want their children working alongside them picking waste. Immediately next to the school I noticed a girl siting on a small clearing she has made on the ground. Her mother moved about the mounds plucking though the rubbish, picking out syringes and glass bottles. They are both bare footed and without gloves. The girl removed the needles with pliers and cuts off the screw tops with a rusty clamp. Her mother gestured for her daughter to look away from the curious visitors. Most likely, this girl will follow the same path as her mother.

A meter away the school children may have a different future. When entering the class they ran to take a closer look at their visitors. ‘Hello, how are you? Hello how are you?’ they called out in their best English extending their hands to be shaken. The school uniform was a blue shirt for the boys while the girls were free to where the traditional colors and headscarves. Beaming eyes and grins stood out in the dust, ‘Hello, how are you?’, they repeated until each hand had been shaken.

The school provides the Wasterpicker’s children with the opportunity for a new future that in turn will help their parents and families in years to come. They learn to read and write in Bengali and English. They learn of the different occupational possibilities, basic hygiene; and above all that their worth is equal to all others. But the school is not the only focus of the social workers. They know that the Wastepickers community as a whole needs support.

The Wastepickers came from different parts of Bangladesh to seek a better life, and in doing so they left behind their traditional and extended family safety nets. ‘These nets of obligation to one another’, a social worker explained, ‘must be recreated even though the people come from every direction of the wind’.

As informal workers, Wastepickers can’t join a union but with support from the social workers they have been able to form a Cooperative. I attended one of their meetings. One Wastepicker explained why they have formed a Cooperative. She showed me an identity card worn around her neck held with a blue ribbon and pointed out that they all wore the cards. ‘These show everyone that we belong’, she said through an interpreter: ‘People don’t want to recognise us, but we belong’.

She continued, ‘We make a regular small payment to the Cooperative and we can use this money for training or for when one has need’. She asked another woman to speak: ‘I arrange the training’, she said, ‘hand washing, hygiene and learning new skills’. Another woman said she was the Cooperative’s Women’s Rights Officer, ‘We need to talk about women’s rights’, she said, ‘because if we don’t talk about them, we don’t have them’.

At the end of the meeting I was asked if I could present a gift on behalf or the global profession. It had been organised by the social workers for a 15-year-old young man. Last year he had lost his foot and lower leg while picking waste. As soon as he was well enough the social workers organised for a local tailor to train him and his sister in a new profession where having both feet was not necessary. His mother spoke to thank the social workers; ‘Our family will all have a better life now’ she said, ‘my children will help the whole family. Our lives are changed’. 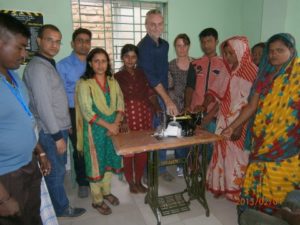 That afternoon we visited the Director General and senior officials of the Department of Social Services to advocate for the expansion of social protection systems that enable people to take control and shape their own futures. Because of the work of the  Social Work Association Bangladesh there were plenty of positive example to draw from.

I wish to acknowledge and thank Mr Repon Chowdhury Secretary-General of the  Social Work Association Bangladesh and social workers who work with The Bangladesh Occupational Safety, Health and Environment Foundation that created the programme with the Wastepickers community.