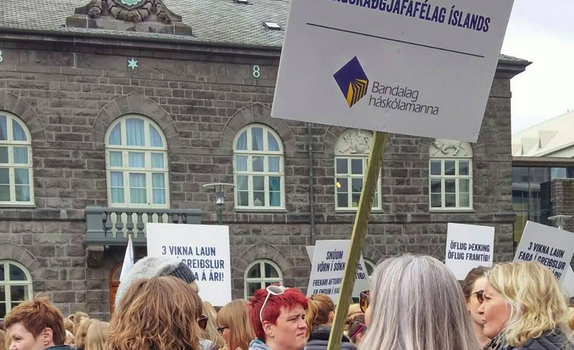 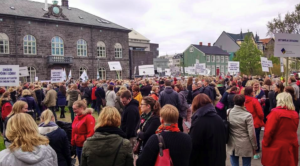 IFSW member The Association for Social Workers in Iceland has taken a stand to support better wages of social workers and all public professionals. IFSW Secretary-General, Dr Rory Truell commented,

“Social Worker’s from all over the world stand in solidarity with their colleagues in Iceland. Social workers are not paid fairly for the complex and demanding work they carry out each day. All societies need professional social workers to support vulnerable persons, and to facilitate socially sustainable outcomes for individuals, families and communities. By keeping social worker’s wages low, by minimising and undermining the profession, the Icelandic Government is causing longterm damage and inadvertently escalating costs: Emotional costs to the people who cannot access support; costs to the professionals who have to sacrifice their training and support needs; and significant financial costs to society as people who cant access social services very often need longer hospital stays, and suffer family/relationship breakdowns which lower productivity in the work place, and put extra strain and financial burden on education, health, police and prison services. We wish the Association of Social Worker in Iceland every success in their campaign”

María Rúnarsdóttir Chairperson of the Association for Social Workers in Iceland has provided the information below outlining why social workers are supporting strike action:

The claim for better wages

Since the beginning of 2014, social workers and other academics in the Association of Academics working for the state have been fighting for better wages. The reason for the joint fight for better wages is that the wages of public professionals has been frozen since the economic crisis in 2008 and due to downsizing in public welfare and other organizations our wage setting system is ruined.

More than 95% of social workers were wiling to strike to support their claim for better wages. The majority of academic professionals working for the state felt the same and the academics decided to strike together, members from 17 unions. The State has not met our claims and argues that correcting wages for some groups will have difficult consequences for the economy in Iceland. However, this January the state agreed to increase wages of doctors considerably more than the general wage increase was.

On the 13th of June, the parliament passed a law ordering striking academics to go back to work. The law gives the debating bodies two weeks’ time to reach an agreement. If not, an arbitration committee will be appointed on the 1st of July. The committee will have the power to decide a new collective bargaining agreement and it is especially stated in the law that the committee shall take account of the recently signed bargaining agreements in the general market. The committee is given until the 15th of August. During this time, the professionals, social workers included, are forbidden to engage in any strikes, work stoppages, lockouts, or any other action authorities could deem as organized worker action against management. We experience these laws violating our rights to make an independent collective bargaining agreement on behalf of our members as well as our right to strike to support our claims. We have criticized the laws and the Association of Academics with the support of the seventeen unions have decided to take the Icelandic government to court over the matter, arguing that the legislation violated our constitutionally protected right to strike.