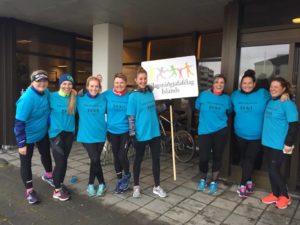 On October 17, the International Day against Poverty social workers in Iceland ran and organised an spread out in the street to make awareness of poverty and precariousness of the Icelandic society towards poverty.

Maria Runarsdottir, President of the Icelandic Association of Social Workers stated that “Social workers followed Lena Dominellis advice during IFSW European Conference in Iceland last May 2017 when she urged Social Workers to have a strong voice and speak out about precariousness towards minority groups and marginalized people. We did not walk/run as far as our colleagues from the British Association of Social workers but we hope that this project today has raised awareness of poverty in Iceland and the precariousness that is still in our society”