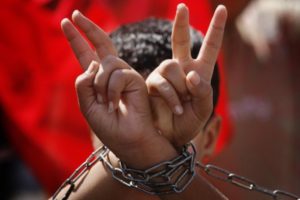 On Human Rights Day 2014 IFSW wishes to express its concern over the treatment of Palestinian minors who have been arrested and interrogated by the Israeli authorities for alleged stone-throwing and other crimes. The current law for throwing stones (throwing objects with the intent to harm), carries a two-year sentence of imprisonment, and on average children spend two months in prison. The time spent in prison and house arrest prior to trial is not taken into account in sentencing. Social workers are extremely worried as the current Israeli government is introducing new legislation that extends the imprisonment period for this offence to 20 years.

There are many children imprisoned without due judicial process, including use of solitary confinement. Minors are also routinely shackled during court hearings in the Israeli military prison system. The average age of children detained is 10 – 13 years old. Social workers working with the children after their release said that they suffer trauma at separation from their families, and they also internalize that their parents have failed to protect them. Further family problems develop when children are released under house-arrest as they feel that their parents are then ‘policing’ them and denying them the normal right to see their friends and attend school. Often the children lose so much schooling that they feel they can no longer act normally and then drop out of school completely. Once convicted their rights to travel are withdrawn, accumulating into ruined lives and increased hostility. The treatment of Palestinian minors is unjustified in the context of human rights, and even if these minors do have cases to answer, the state should apply the same protection to Palestinian minors in detention that it allows to Israeli children.

UNICEF has raised concerns over this treatment and in a recent report found that the ill-treatment of Palestinian children in the Israeli military detention system was “widespread, systematic and institutionalised”. UNICEF has noted that Palestinian children have the right to protection against violence and abuse and those children at all times must be treated with dignity and respect in accordance with the UN Convention on the Rights of the Child. The international human rights organisation Human Rights Watch has noted that Israeli security forces have arrested children in their homes at night, at gunpoint, blindfolded, forcibly brought to a detention centre, and questioned without a family member or a lawyer present; and coerce them to sign confessions in Hebrew which they do not understand.

The Israeli human rights organisation B’Tselem, which received the 2014 Stockholm Human Rights Award, reports that at the end of October 2014, 163 Palestinian minors were held in Israeli prisons as security detainees and prisoners, with another 17 held in Israeli prison service facilities for being in Israel illegally. Although military youth courts were established in 2009, Israeli youth law is not incorporated in the military legislation and the protections which Palestinian minors should expect are not available as they are for Israeli minors.

Social workers are concerned that they are constantly managing and supporting communities to stop children throwing stones, but it is extremely difficult with families’ land and housing being cleared to make a way for new settlements. With the protection of the Israeli army, some settlers carry side arms, revealing them to the children or throw bottles of urine at them as a part of their campaign to claim the Palestine area for Israel.

The IFSW urges the Israeli government to respect the rights of all children living under its jurisdiction and joins with other international organisations in calling for an immediate ending to the harsh and discriminatory treatment afforded Palestinian minors. This statement, issued on Human Rights Day, is especially relevant as this year is also the 25th anniversary of the UN Declaration on the Rights of the Child.