IFSW Secretary-General, Rory Truell visited Vienna and Munich last week to see first hand the social work response to the refugee crisis. This is his report: 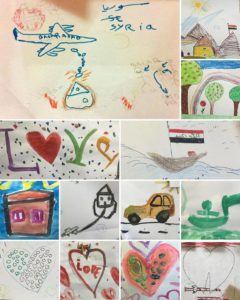 These are a few of the pictures in the temporary kindergarten set up in Vienna’s main railway station run by volunteers and social workers responding to the thousands of refugees as they make their journey to find safety and security.

Corridors in the railway station are lined with tables offering donated food, clothing, hygiene products and advice. Advice on which boarders are open or closed. Advice on how to register family members that have become lost on the journey. Where to find a place to wash, and if there is no room left to sleep at the railway station, advice on where else to go that is safe.

When the packed trains roll-in there is only standing room which swells into the streets. Social workers and volunteers find themselves standing amongst the crowds responding to one request, then another and another. Giving guidance on the possibilities ahead, pointing to the possible places where families can rest and eat.

The situation is chaotic and painful for the refugees who have travelled with such uncertainty; and not knowing the challenges that lie ahead tomorrow. The volunteers come out in their hundreds each day, organising donations and distributing them.

It is a vista of the best and worst of humanity. The worst, as the refugees are escaping wars that could have been prevented if politicians had the will to engage with one another, and also if the international agencies had of been able to provide and protect refugees closer to their home countries.

The best of humanity because of the outpouring of volunteers of all ages, many who were previously refugees themselves, who recognise their obligations and responsibilities that all people should be treated with dignity.

The Austrian government’s response to the crisis has been extremely limited and it is clear that the politicians have been caught off-guard, which has an enormous human cost, including to the 1300 unaccompanied children held in a temporary camp close to Vienna. It was clear that when the World Food Programme cut their funding to refugees in the camps in Turkey and North Africa people would have no option but to take their families on a perilous journey to find places to survive. It is also clear that the millions of remaining refugees in Turkey and elsewhere will also take the journey northwards as the war in Syria is intensifying and situations in Afghanistan and Yemen show no signs of improvement or hope.

But while politicians have so far failed to create a positive humanistic response to this crisis, many of the citizens of Austria and other European countries have taken action. The outpouring of volunteers in Austria and Germany who have welcomed the refugees sets an example for the politicians to follow. Sometimes the answers come from the governments, but often and in this situation the governments will have to react to the actions of civil society.

Many social workers moved directly into action. Work plans that were once focused on normal daily social work activities changed to supporting families without food or shelter. Assisting young women that have had to use their bodies to pay the price of journeying from extreme poverty and conflict to somewhere safe. As soon as the crisis began the social workers came together to support and advocate solutions in this crisis.

At the heart of social work are the principles of respecting human dignity, actively supporting the right of people to have a say in their own development / recovery, and building people’s capacity. At a meeting organised by the Austrian Association of Social Workers for government services and NGO’s responding to the crisis, social workers commented that: ‘We need to now break down the traditional silos that have divided us. We need to think outside the box, share resources and work together in new ways to maximise our abilities’.

The Austrian social workers have reached out to social workers in all the countries that people are fleeing from and arriving in, through an electronic blog on the IFSW website. “We need to be able to connect people who are lost from their families and we need to know when another big group of refugees will arrive. We cannot get reliable information from the media or the government.”, an Austrian social worker explained.

Last week a representative from the Austrian Association joined a meeting with the German Association of Social Workers to increase coordination and share learning. Both Associations hope to be able to hold further meetings with social workers from all the affected countries to support better plans for the refugees’ journeys, transition and integration into new environments.

Social workers are also running community education campaigns in the host towns and cities. ‘Most people are very supportive to the refugees and of course some people feel threatened’ a German social worker told me. “For example there was one farmer in a small town who said: ‘Over my dead-body would I allow refugees into my town’, but we took refugees to meet him and after hearing their stories, he wants to do all he can to help”, she said.

Social coordination, organising volunteer-led German language classes, information sessions on how to be orientated to German/Austrian laws, customs and culture, where to find support are all part of the new social work role in each of these countries.

IFSW is also advocating, through its UN accreditation, for global governance to bring an end to the conflicts that drive the crisis and for better coordination to support for the refugees’ access to host countries. Social workers throughout the affected countries will meet next year and continue strengthening their capacity to support the next groups of refugees, their integration and realisation for better lives.

The pictures at the top of this report painted by the children at the temporary kindergarten at the Vienna railway station tell the reality from the child’s perspective. They portray a mix of trauma, trying to create understanding, their journey, restating their identity, and a desire to express love for the care that the volunteers and social workers have shown them.

One volunteer told me, “It’s beautiful to have these children in our Kindergarten, it is a little bit of fun and normality. Every time a child laughs it returns the sun to our hearts.”

Link to the IFSW blog on the refugee crisis

Link to the Austrian Association of Social Workers for messages of support and advise / information. 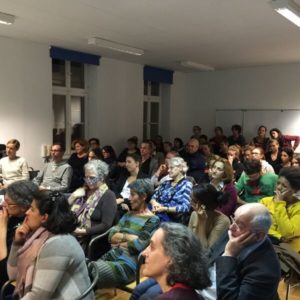 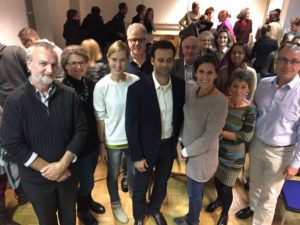 Representatives from the social work and volunteer services. Including the president of the Austrian Association, Mr Alois Pölzl (centre with glasses).