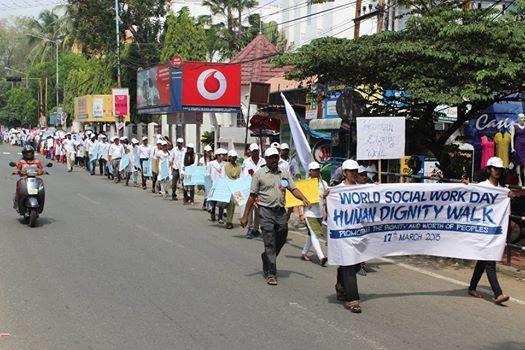 On International Human Rights Day, social worker’s celebrate and advocate for a broader framework of Rights. One that does not only focus only on individuals, but also includes the social, relational and environmental realities in which we all live.

When considering the question ‘what are human rights’, many people tend to think of the 1948 United Nation’s Declaration of Human Rights. This Declaration is often seen as a watershed moment, when many governments came together and said: “All human beings are born free and equal in dignity and rights.”

Indeed, a great many social workers from throughout the world would say that this Declaration represents a significant moment in global social development. However as we approach the 70-year anniversary of the Declaration, it is also important to recognize that not all social workers agree and many do not see the Declaration as being comprehensive enough to contribute to sustainable wellbeing.

In fact, some social workers in African and the Asia-Pacific regions, for instance, say that the Declaration is something of a Trojan horse. It looks fascinating on the outside but inside lurks a form of Western colonization based on individualistic perspectives that seek to dismantle their collective cultural frames of reference. These social workers have a good point, which many frontline social workers from all parts of the globe will be able to identify with.

In all countries social workers practice in the context of competing Rights. We work with families, communities and places of employment where the Rights of one group or one person may be at odds with the Rights of others. The Rights of the child, Rights of culture, Rights of individual expression, Rights of self-determination, Rights of language use, individual Rights, and social / collective Rights – all these create a maze through which the social worker must skillfully navigate and facilitate the members of a family, group or community toward a consensus that safeguards the vulnerable and provides Rights-protection for all.

The UN Declaration doesn’t give voice to the concept of competing Rights and the processes needed to bring people together to find consensus. Indeed, the development of this Declaration is usually seen as a top-down perspective, where governments give Rights to the individuals over whom they govern. This is why the Declaration focuses mostly on civil and political Rights, such as the right to vote, freedom of speech, and freedom from discrimination, fair trial and so on.

Over the years this so-called ‘first generation of Rights’ have been extended to encompass a second generation of human Rights. These include economic, social and cultural Rights, like the right to health, housing, social security and education. More recently there is a growing awareness of the need to implement a third generation of Rights, which relate to social or collective Rights, such as the right to development and self-determination.

It is within all of these layers of Rights that social workers practice, although we see and encounter even more layers of Rights, and the differing histories and traditions from which they stem.

People, as opposed to policies, always have some understanding of Rights. These understandings may or may not be connected to the UN Declaration. People’s perception of Rights could equally be embedded in cultural or family systems, religions, and or sets of rules their groups adopt. For some, such as founders of the American Constitution, their Christian God mandated human Rights. For others, there will be a person within their family, community or history that is the guardian of Rights. To complicate things further, many collective cultures do not focus so much on Rights as people’s responsibilities for creating reciprocal relationships, based on upholding other people’s dignity and worth.

As a global profession – based in ground up realities – that seeks to transform social systems to end oppression, marginalization and disadvantage, it is time for social work to develop a comprehensive framework of Rights, based on the professions principles of social justice, dignity, valuing diversity and sustainable communities.

In addition to the UN Declaration, a more inclusive, holistic and encompassing Social Work Rights Framework can be centered on the four key international themes that where developed in 2010 when three thousand social work representatives gathered from all parts of the world to set an agenda to guide the future of the profession:

Dignity Rights:  People have a Right to be understood holistically, as a unique person with strengths and capabilities. Such a right is often denied by government services, which have been designed to respond to ‘parts’ of people in an inhumane way. As a profession that focuses on the whole person, social workers have taken action on this right. For example, in the Netherlands social workers and the communities they work with have redesigned social services together to enable a more holistic approach to wellbeing. This includes rebuilding social structures to proactively address social issues such as depression and isolation, and to create health and wellbeing plans not just for the individual, but for the whole family and even the community.

The Right’s of dignity also include peoples’ and communities Right to self-determination – the ability to influence their own lives. Research consistently shows that when people are able to make decisions over their own lives they are happier, healthier and live-longer.

A further example relating to the Rights of people’s dignity has been demonstrated in the social work approach to poverty eradication. Unlike governments that tend to see cash-transfers or supplementary benefits as the answer to poverty, social workers understand the multi-dimensional factors that keep people in poverty and dependent on such cash handouts. Social workers in Romania, for example, have led a nationwide strategy assisting people to translate cash benefits into resources that can fundamentally change their lives. Such approaches are achieved through recognizing that restoring people’s dignity and decision making abilities, and informing them of their Rights, shows them how to access recourses. These multi-focused approaches are fundamental in creating transformational and sustainable change that can eliminate poverty and boost people’s confidence and their contributions to society.

Social and Economic Rights. Some of the most profound processes that have led to the first and second generation of people’s Rights have been centered in collective non-violent protest and mass participation in democratic structures. For example, the civil right movements, disability networks, trade unions, and women’s movements have (along with others) transformed the conditions of how people live, making them more inclusive and balanced towards fairness and sustainability.

Social work identifies the Right for people to shape their environments and societies. This includes African social workers and the communities they work within advocating to their governments and the UN that ‘aid’ is degrading and not a sustainable approach. They say, transform the global tax system to ensure that multinationals and offshore governments, who extract African minerals, pay their taxes in Africa as opposed to tax havens. This would amount to more money than all of the aid that Africa currently receives. A simply demand, where people want their economic and social Rights based on fair systems in global practice.

The need for the implementation of social Rights has been highlighted in the last weeks as it grows more obvious that contemporary ‘simplified’ democracy results in some considerable failures. In last month’s US elections, for example, the clear winner was the ‘non-vote’, as 50% percent of potential voters did not participate in the election process to determine their future wellbeing.

Social workers are acutely aware that voting every four years, in the secrecy of a private booth, does not secure the kind of democracy and political structures that are needed to engage people’s involvement in the environments that dictate their health, security, rights and future wellbeing. Consequently, social workers have been consistent advocates for the implementation of Rights that enable people and communities to actively shape their environments. In other words, it is about saying ‘no’ to governance of the people, and ‘yes’ to governance by the people.

Environmental Rights. IFSW recently formally recognized the importance of the Rights of Nature and identified the role of social workers in developing themselves and others as guardians to create sustainable communities and environments. In many parts of Latin America and Asia-Pacific, social workers have advocated that land, water and air be given Rights as if they where personalities – so that they will not to be exploited, but instead are able to thrive, grow and be sustainable for this and the generations to come. Such an approach is essential in the context of the planet’s limited and fragile resources, and the increasing practice of the over-exploitation of nature, which will directly affect the symbiotic relationship between the billons of people and earth.

Relationship Rights. Social work aims to preserve and enhance social relationships because we intrinsically understand that interdependence of peoples is a core requirement for achieving quality of life. Health researchers have also validated that the social determinants of health are key to society’s sustainable wellbeing. People need to be in loving environments that acknowledge and appropriately challenge them, based on supportive relationships.

Social workers understand that a person’s family plays the most fundamental role in their future wellbeing and, as such, we recognize that people have a Right to quality relationships in their families and communities. Sadly, however, in the social legislation of some countries, Rights only focus on the child, while the family and community is usually not taken into consideration. This, all too often, results in children being removed from their birth parents, rather than the more humane and economically-viable approach of providing the original family with the support, resources and education needed to secure the Rights of the family relationships.

Social workers have challenged such practices that negate relationship Rights and prioritize an individual. One example is called Family Group Conferencing. In this process, the wider family and others are bought together to strengthen the social relationships and to define the responsibilities of family members toward one another. In places where this practice has been enabled by legislation and the appropriate training of social workers, many hundreds of thousands of families have learnt to stay connected/bonded and children have avoided entering the often downward spiral of inter-generational foster care systems.

Human Rights have been and will continue to be at the core of social work practice. There is no question that social workers will continue facilitating the day-to-day realization of people’s Human Rights. The above Rights highlight a broader framework that social workers encounter in their work between family, community and group members. This understanding of Rights spans beyond the UN Declaration and takes into account the differing perceptions of rights as they relate to not just to individual people, but also to the social, relational and environment contexts in which we live. It is time to open the discussion within and outside the profession and work towards a holistic and inclusive Social Work Framework of Rights.

Link to edited version in The Guardian