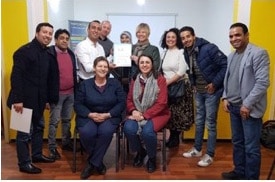 Twinning can possibly be a fruitful concept to stimulate the cooperation between IFSW members, especially to support associations in countries were the development of social work as a profession started much later than in for instance Western Europe and North America.

In 2019 the national association of The Netherlands BPSW started, on a request of Rory Truell, a so-called twinning, a partnership with the Moroccan Association of Social Workers (AMAS)

In March 2019 we had a first meeting to get to know each other. AMAS is a rather young association, as social work as an official profession does not exist that long in Morocco. The first professional education started in the late nineties, and now most universities in Morocco have a department of social work, often as a part of the sociology department. The education is mainly theoretical; for the learning of soft skills students have to go to other institutions.

AMAS has about 300 members. The steering committee is based in Fez and is not yet organized nationwide. As in lots of other countries, the association has useful contacts with a university in Fez. The areas are mainly health care, people with disabilities, youth care and single parents. Most of the social work in the country is, as on many other places, done by volunteers without any professional education. The authorities do not give much funding, and most of the foundations that work with for example children depend for lots of things on donations and volunteers. The government provides for buildings and medical staff, but however social work is a growing profession, it is not always recognized as vital for society. We were impressed by the way social workers in quite different circumstances do their job with great enthusiasm and endless effort. In the meantime they study together to achieve further professionalization of social work.

So, the differences between the two associations are huge. In a country with a high level of social care and welfare institutions one has to cope with different issues, so the question is: what can a partnership really mean?

In our visit in March 2019 we started with the signing of a document to seal the cooperation. The cooperation is supported by Professor Asma Benadada from Sidi Mohamed Ben Abdella University in Fez, International Success Academy (institute for soft skills in Fez), and two universities for applied sciences in The Netherlands, NHL Stenden, Leeuwarden, and HAN Nijmegen, that is opening an International Social Work program within their Social Work bachelor studies.

We visited some projects and discussed the possibilities. Later in 2019 students and lecturers from both Dutch universities visited Morocco, to exchange ideas and to learn more about Morocco.

The plan was to have a delegation of AMAS on a visit to The Netherlands, but Covid-19 came in the way. All the preparations were done, and the Moroccan colleagues got their visa to visit the Netherlands (which is not an easy thing to obtain). Issues to discuss were of course how the cooperation could be extended, with special focus on social work in healthcare and in schools, especially primary education. We were to elaborate on theories about poverty and human rights.

Our idea is to create international learning communities, in close cooperation with universities, where education, research and practice can enforce each other. To obtain this we need local social work practices to make things work, and to enhance the quality of life.

We can summarize some lessons we learnt: