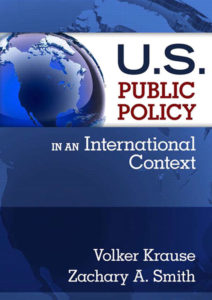 Refreshing, straightforward, and easy to understand, Volker Krause and Zachary Smith capture the essence of policy comparison in their book, U.S. Public Policy in an International Context. Dr. Krause and Dr. Smith are both recognized authors and university professors. Dr. Krause is a professor at Eastern Michigan University and has published articles with International Politics, Peace Research, Social Science Quarterly, International Interactions, and Conflict Management and Peace Science journals. Dr. Smith is a professor at Northern Arizona University. He has authored/edited over 20 books and has written numerous articles on policy and administration.

This educational resource provides an overview of public policies through eleven book chapters, providing an extraordinary overview of public policies and policy development processes in the United States, including a comparison of United States public policy with similar public policies in an international context. Unlike other books of its kind, the authors of U.S. Public Policy in an International Context purposefully utilize the United States as the country of reference for comparison. Policies for comparison include election, criminal justice, health care, social welfare, air and water pollution control, alternative energy, and trade policies. Countries of comparison include India, China, Canada, Sweden, Brazil, the Netherlands, and Japan. It should be noted that the selection of countries for comparison was not random. The authors selected these countries based on the country’s importance in the world, media coverage, and public policy exposure. Selected countries are a good choice as all the comparison countries are key players in global affairs.

Anticipation builds as Chapter 3 sets the stage for the analysis of policy comparison in chapters 4 through 10. The chapter begins by identifying the dominant social paradigm (DSP) and demographics in the United States, defining dominant social paradigm, and posit how public policy could be a direct result of a nation’s (DSP). Understanding DSP in the United States is critical for helping the reader recognize differences with other countries. Enhancing the reader’s knowledge, the chapter deliberates on the representative democracy of the United States at the federal, state, and local levels, how they are virtually identical, and the formal influences each institution of government has on policy development. Furthermore, informal influences on policy creation such as interest groups, short-term bias, and crisis are examined. The chapter also considers other forms of government for comparison with other countries.

Overall, U.S. Public Policy in an International Context provides readers with a good overview of public policies and policy development processes in the United States with a quality comparative framework. The book gives an objective viewpoint on how the United States compares with other countries in creating effective public policies and is a good reference tool for travelers, citizens, scholars, government policymakers, and others interested in various public policies from around the world. The comparison with other countries makes this book a must have as it has remarkable historical and informational value. The book could be strengthened by making multiple comparisons for each public policy.

Don Kelly has a BA, Masters, and Ph.D in social work and a Master’s degree in criminal justice. His research includes peer mediation, restorative discipline, and mental health in schools.