Romania is no stranger to hardship. 42.5 % of children are living in poverty and the more than 40% of the entire population live under the poverty line. For the last 20 years successive governments have unsuccessfully tried to deal with poverty by offering limited financial support, such cash transfers. This according however to social worker Ana Radulescu is only one part of the solution and by itself will not address the causes of poverty or the multidimensional factors associated with poverty.

With recognition that past Government attempts to alleviate poverty have failed, social work is now being recognised as one of the key contributors enabling people to sustainability move out of cycles of poverty.

Ana Radulescu, leader of National Association of Social Workers – ASproAS, (IFSW member in Romania) says social workers are now being recognised for competencies that help people not only to access resources but also to use those recourses in changing their lives.

The approach has been endorsed by the Romanian Minister of Labour and Social Protection Dragos Pislaru, an economist by training, who said: “A society cannot progress economically when an important part of the country lives in social exclusion. Without social workers and without their skills a country cannot progress in term of social inclusion. Romania can only move forward when we understand that inclusion is not achieved just by giving money away. But inclusion is the strategy through which we can mobilize society to care about each other. This is a core foundation to providing future access to labour markets and economic growth.”

Minister Pislaru is now working with Ana Radulescu and social workers to create a strategy across all government departments for an integrated approach to address the multiple vulnerability of families. There joint vision is to ensure that social workers are active in every community social service. This vision is now being implemented by bringing together experienced social workers to develop best-practice approaches aimed at empowering communities and individuals to gain control and confidence and security in their lives.

IFSW Secretary-General, Rory Truell who visited Romania last week said, “The whole international profession will be inspired and encouraged seeing their colleagues gaining such recognition and visibility for their work. Social workers have been consistent advocates that confident and engaged communities with good social structures are an essential foundation for sustainable economic development. The work being carried out in Romania will be essential to overcoming the many crippling social problems left behind from decades of dictatorship and a failed state. We hope that other governments and international political agencies will closely follow the work lead by Minister Pislaru, Ana Radulescu and Romanian social workers”. 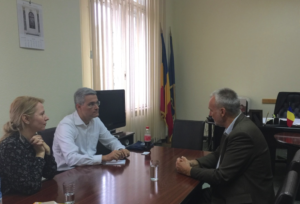