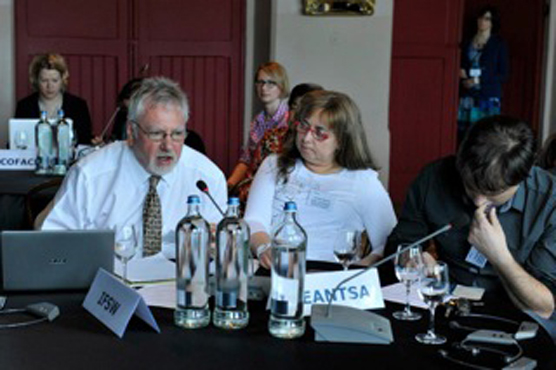 Ian Johnston and Cristina Martins express appreciation to the Platform’s 2013 General Assembly for the strong message conveyed by the Platform to the European Commission and Council about the importance of social services and the impact that cuts in these is having on those citizens who were already most disadvantaged and excluded.

IFSW Europe is an active member of SocialPlatform, the Platform of European Social NGOs. The organisation has published its Annual Report 2012 highlighting their focus on trying to revert the trends by requesting the inclusion of a Social Pact in EU economic policies, supporting the creation of quality employment, and enabling the development of social services and social enterprises. In 2012 Social Platform and its members mobilised and called for the priority of social justice, active inclusion, poverty eradication, fundamental rights and anti-discrimination in EU policies.

Pierre Baussand, the Director of SocialPlatform, says in the preface that the focus of the European Union should “not only be about the economy but include social investment and political choices that put people first. Solidarity should be our leading principle, with the poor in our societies and with those countries under threat of austerity priorities.”

Read about the Social Work Message from austerity affected countries