The European Union has recognised that youth unemployment – which exceeds 50% in some countries – presents a major risk to social stability. 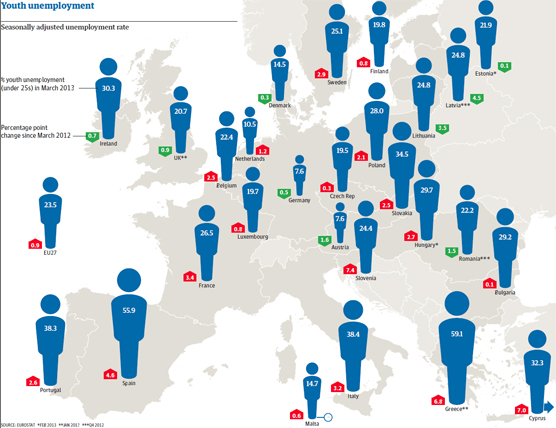 Click on the picture to enlarge the map of youth unemployment in Europe.

European leaders warned on 28 May 2013 that this could lead to a continent-wide catastrophe and widespread social unrest aimed at member state governments.

The French, German and Italian governments agreed to launch initiatives to “rescue an entire generation” who fear they will never find jobs. More than 7.5 million young Europeans aged between 15 and 24 are not in employment, education or training, according to EU data. The rate of youth unemployment is more than double that for adults, and more than half of young people in Greece (59%) and Spain (55%) are unemployed.

François Hollande, the French president, said this is the “post-crisis generation”, who will “for ever after, be holding today’s governments responsible for their plight”.  “We’re talking about a complete breakdown of identifying with Europe”, he added.

Herman Van Rompuy, European council president, pledged to put the “fight against unemployment high on our agenda” at the next EU summit in June. “We must rise to the expectations of the millions of young people who expect political action,” he said.

The commission estimates youth joblessness costs the EU €153bn in unemployment benefit, lost productivity and lost tax revenue. “In addition, for young people themselves, being unemployed at a young age can have a long-lasting negative ‘scarring effect’,” the commission said. “These young people face not only higher risks of future unemployment, but also higher risks of exclusion, of poverty and of health problems.”

IFSW has been working with the European Social Platform to highlight the social costs of the financial crisis and austerity.  Members of The International Federation of Social Workers (IFSW) from Spain, Portugal, Greece and Ireland meet with Commissioner László Andor, European Commissioner for Employment, Social Affairs and Inclusion to engage the European Union in understanding the dire social affects of austerity upon the people of their countries. The delegation of Presidents from social work organisations was accompanied by Ian Johnston (IFSW Europe Executive) and Rory Truell (IFSW Secretary General).  They  presented individual examples of the impact of service cuts on vulnerable people.

The Global Observatory on Social Work and Social Development will publish its first overview report on social work and social activity at the world conference in July 2014.  The Observatory is currently calling for submissions with evidence to inform the global report.  The IFSW European Region is working with member organisations to develop a report on the impact of austerity on social work programmes in Europe; this will feed into the global report.