We would like to share the activities of the Korean social work related to Covid-19, which become pandemic all over the world. 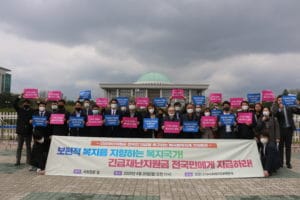 -The Korean Association of Social Workers (“KASW) is working as a secretariat of the Welfare State Realization Coalition and 4 other social welfare organization come along with.Social Welfare Headquarters held the first meeting on March 30th(Mon), and recently on April 20th (Mon), held a press conference on the pan-social welfare industry urging All nation to pay emergency relief funds. It was more meaningful because it was just after the General Election every 4years.

-In addition, Social Welfare Headquarters will continue to discover the agenda and work to prevent the Marginalized spot caused by Corona 19. 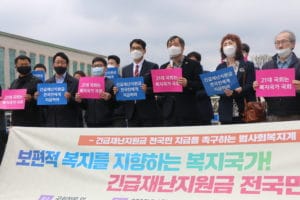 -In addition to this, each local government plan to pay additional relief funds their own.

-It is a loan that is unsecured and interest-free for one year, and the repayment of loans and repayment of funding proceeds in 2021, and the principal will be returned after one year without interest.

Social worker in Korea is the main agent of public-private cooperation in relation to the Corona 19 incident, and above all,become main of solidarity. Once again, it was an opportunity to reconsider the necessity and role of social workers’ dedication. We support our social worker colleagues all over the world. Hope that new life will come after this cruel time which no one has ever experienced.

2 June: IFSW Call for Action on Equal Access to Vaccines

20 April: Co-building a New Eco-Social World: Leaving No One Behind. 160 Million Social Work and Health Workers Collaborate for a New World Future

4 November: To the Top of the Cliff: How social work changed with COVID-19

1 July: The Social Work Response to COVID-19 – Six Months On: Championing changes in services and preparing for long-term consequences

9 April: Femicides: When you live with the murderer. A reading in times of Compulsory Social Isolation

8 April: It is the time to replace models of nationalism and charity with new global ethical foundations: What the World Can Learn from International Social Work

7 April: Ethical Decision-making in the face of COVID-19

26 March: As social workers work through the Covid 19 crisis we work towards a better world

11 March: Statement on IFSW and Covid-19

1 March: Update on the Corona Virus for IFSW Members